Claude Monet is a painter who, when he made a village landscape, called his name only a village landscape. This situation was very challenging for the curators who had to name the paintings in order to exhibit them. When he had to name the picture that depicted a sunrise, he said, why don’t we just call it an impression. Name of the painting; It was recorded as Impression Sunrise. This content will be about Claude Monet, a painter who is not very interested in naming his works.

The name was found. Critics loved this name! Louis Leroy, in particular, depressingly said: “Impression I was certain of it. I was just telling myself that, since I was impressed, there had to be some impression in it — and what freedom, what ease of workmanship! A preliminary drawing for a wallpaper pattern is more finished than this seascape.”

Claude Monet generally did not mind these criticisms and liked the names he gave himself. He had caught what he was trying to do, recording an impression of a moment in time. 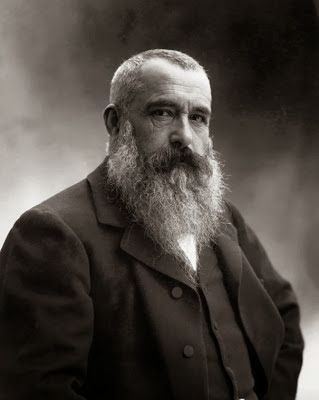 The Life of Claude Monet and His Paintings

In the French Port city of Le Havre, Claude Monet, the son of a shopkeeper, showed a remarkable talent for creating brilliant cartoons at a young age. When he left school at the age of 17, he was easily making money with his drawings. Thanks to these cartoons, he had already saved 2000 francs, which he had devoted to forming his painting profession.

With the assurance of the money he had saved, he set out to Paris at the age of 19. He studied there for 2 years until he was enlisted. Surprisingly, given his failure at school, he was given a master cavalry regiment trained in Algeria. However, he was sent back home for typhoid fever within a year.

He had returned to Paris in 1862. This time he was at the Charles Gleyre’s academy, which taught traditional painting methods, none of which concern him. At a young age, he devoted himself to outdoor painting, to works made directly in nature outside. It could be said that he went a long way in developing his own style.

With Camille Pissarro, Pierre-Auguste Renoir, Alfred Sisley, Frederic Bazille, who were students at the same academy, their understanding of art was as similar to sister souls. One afternoon in 1863, they left Gleyre’s workshop and went to the countryside to paint.

Officially, this was the end of Monet’s painting education. 1865 was a good year for Monet. He met Camille Doncieux and, perhaps more importantly, his landscape was accepted by the official exhibition of the state, the Salon. Two years later, her ambitious painting Women In The Garden, which she presented to the hall, was strongly rejected. Camille, on the other hand, was expecting a baby from Claude Monet in those days.

Claude Monet’s conservative father was very angry with this baby news and persuaded his son to return immediately. Camille, meanwhile, was left alone in Paris to give birth to the baby. Over time, Father Monet has softened enough to pay his son, albeit a small amount. But this money was not enough to take care of the newborn baby and Camille. Monet turned into someone who regularly requested loans from his friends.

Here is a little square of blue, here an oblong of pink.

In 1869, when the pictures he presented to the hall were rejected by the hall, Monet’s morale was so depressed that he threw himself into the Seine river for suicide.
He decided that this work he had done at the last minute was unwise and gave up his attempt.

In the summer of the new year, a war with Prussia is looming. Monet, a former soldier, faced conscription and wanted to escape at all costs. For this escape, he was first married. Because married men were the last to be enlisted. He must have thought that this would not be enough when the war broke out, he fled to London with his family. They stayed there for over a year.

They came back to France in the autumn of 1871.

Having settled in a small town outside of Paris, Claude Monet wanted to get rid of artistic rules and paint what he saw, not what he knew was there.

The painters who were educated at the academy were taught to paint objects in their natural colors, that is, to paint a cloud white-gray and a tree bark brown.

According to Monet, when painters were drawing these objects in their natural colors, they did not take into account how the light falling on those objects affected the human eye.

“Try to forget what objects you have before you – a tree, a house, a field, or whatever. Merely think, ‘Here is a little square of blue, here an oblong of pink, here a streak of yellow,’ and paint it just as it looks to you, the exact color and shape until it gives you your own impression of the scene before you.”

In short, Monet’s goal was to reflect a scene at any time in accordance with the situation of that moment.

After years of rejection by the Salon, Monet finally got the idea of an independent exhibition. In 1873, he worked with Edgar Degas to make this love of his dreams come true.

The critics made the impressionist label based on his extraordinary paintings for that period and criticized the resulting works heavily.

As a critic examines a painting called Boulevard des Capucines, which depicts a view of the streets of Paris, he establishes an imaginary dialogue with the painter.

The critic of the paintings: What do all those black droplets on the picture mean?

The painter answers this question: “Pedestrians”.

Then the critic asks the question: “I mean when I walk on the street, do I look like this. Are you mocking me?”

In 1876 Monet found a new wealthy customer. Ernesto Hoschede. He established family relationships with him, apart from customer relations. As the general economic situation suddenly declined, business orders slowed down and Monet began to borrow. His friend, Ernest Hoschede, suffered even more from this economic crisis, he left his wife and four children and fled to Belgium after he went completely bankrupt.

Claude Monet took care of the remaining family and invited them into their home to live. Shortly after this invitation, Monet’s wife had cancer and died. Alice became the lover of Claude Monet, ex-wife of Ernesto Hoschede. However, there is no clear information as to whether this happened before or after the death of Monet’s wife.

Monet made a portrait of his wife on her sickbed to pay respect.

That winter was perhaps the worst period of Monet’s life. In the following days, the economy improved and customers returned. Monet, who lived in the countryside in the autumn of 1890, used the Haystacks in the fields around him as a motif to capture what he called the weakness of light and atmosphere.

In the end, he completed 25 paintings showing different seasons and times of the day. These paintings are one of the most famous paintings of today.

When he appeared on these paintings in 1891, critics and art lovers finally understood what Claude Monet wanted to do.

The success of the Haystacks led Monet to paint another series of paintings. Water Lilies, Rouen Cathedrals, Houses of Parliament, Charing Cross Bridge, and Poplar Trees are the best examples of these series.

Claude Monet was so passionate about his art that; In World War I, although German troops came close to 65 kilometers, Monet continued his work.

He was concentrating more and more on a subject. The water lilies in his garden, the subject of 250 canvases, were an important indicator of his obsession. During World War I, he worked with marvelous curved canvases, giant canvases that were more than two meters long, and at times even up to four and a half meters. After the war, he met with his friend the Prime Minister, and managed to build an oval exhibition hall. He exhibited these works here.

In the early 1900s, Claude Monet realized you had trouble seeing. He knew of Edgar Degas’ problem, of course, and feared he would eventually be the same. But he was diagnosed with cataracts, a curable disease.

Modern Art was on the rise around the world. Contemporary painters simply described Monet’s work as ‘nice’. In other words, Monet’s paintings were ridiculed for the second time after his first term. Of course, this decline did not last long and Monet’s art regained its value in a short time. Claude Monet died in 1926 at the age of 86, without realizing how much the understanding of art had changed in the world.

If you are looking for an interesting story about Claude Monet in this content, let us tell you that too.

When Monet was going through difficult times economically, his name had not yet been heard so much, in 1877 he decided to paint the Gare Saint-Lazare train station.

And he thought the best time for the light was thirty minutes after the train took off. But the station did not have the habit of making delays specifically for painters. Monet put on the best clothes he had available. He went to meet with the railway office manager, holding his golden-stemmed cane. After communicating the reason for the visit to the office manager, he met with him face to face.

“I have decided to paint your station,” said Monet when he arrived in the office of the stationmaster at Saint-Lazare. “For some time,” explained Monet, “I have hesitated between your station and the Gare du Nord, but I think yours has more character.”

By appealing to the director’s competitive ego, the French artist got what he wanted. “The trains were all halted; the platforms were cleared; the engines were crammed with coal so as to give out all the smoke that Monet desired. Monet established himself in the station as a tyrant and painted amid respectful awe. He finally departed with a half-dozen or so pictures, while the entire personnel, the Director of the Company at their head, bowed him out.”

So in 1877 Monet made 11 paintings of his favorite Parisian station.

Claude Monet was so self-confident and arrogant at the station that the Station officials did not even realize that for the moment there was an anonymous artist whose paintings were rejected by the hall.

Woman with a Parasol, Madame Monet and Her Son

Woman with a Parasol, Madame Monet and Her Son, 1875 by Claude Monet

Beach at Pourville, 1882 by Claude Monet