He continued to paint the landscape he was working on, regardless of the slow clouding of the afternoon. Even the pouring rain could not stop him from his determination to complete this landscape painting! If he respected his now aging body, he would have left there and gone home already. But his passion for discipline and painting, which has spread to his character since his childhood, made him ignore this necessity… Now let’s get to know together this disciplined and passionate painter, Paul Cezanne.

.. Later, when he thought that he was working enough, he set out to his home. Within a few days, the negative consequences of that rainy day he had lived came to light. The doctor was called immediately. The diagnosis was pneumonia.

The old body could not bear this new burden added to already existing diseases. Paul Cezanne, who said hello to life on January 19, 1839, had to say goodbye to this world on October 22, 1906. Perhaps he felt it was the last painting of that painting he had made and struggled to finish it.

Paul Cezanne, whose last moments we describe here in a few sentences, is undoubtedly a very important name for the history of art.

Art is a harmony parallel to nature

It is possible to say that his artworks speak, but these paintings tell a single sentence. “I am Paul Cezanne’s work.”

This is due to their enormously distinctive nature. This structure has become a kind of light for all the artists who will come after him. Although he is an impressionist painter; It is very different from Claude Monet and Renoir, and even ahead of them for some.

He was more aware of the limits and inner contradictions of Impressionism than anyone else had.

“The eye is not enough, it is also necessary to think.” The sentence reflects his understanding of painting very well. He preferred to spend hours in nature to paint a painting, unlike the impressionism technique of his contemporaries.

“Art is a harmony parallel to nature,” Cézanne once wrote. Art is neither an imitation of nature nor a complete divergence from it; it is a similar but separate thing.

During the year Paul Cezanne was born, his father was a well-known hat manufacturer.

He went bankrupt in 1847, took a bank business, and established his own bank. Thanks to this merchant, Paul Cezanne, and his two brothers have never had any economic difficulties in their lives. Besides the large material inheritance left by his father, Cezanne inherited a spiritual heritage.

Self-cultivation effort in a disciplined way.

Just as his father was disciplined and diligent in business, Paul was zealous for self-cultivation and living discipline. He would say the following about creativity.

These were the principles that made Cezanne successful.

It was a fact that he was not very successful in the art of painting, which he became interested in from a very young age. He even had bad results from his art class.

He entered the Bourbon College (Collège de Bourbon) as a boarding student in 1852. Even though he did not make much progress in the field of painting, he did not hesitate to improve himself.

He formed a deep friendship with his classmate Emile Zola starting from these school years. This friendship would come in handy in at least part of his artistic life in the future.

He believed that he was created as a painter even though he did not seemingly have a superior talent for painting. Therefore, despite all his disappointments, he was taking permission from his school at certain times and taking painting lessons from an art school. He found the first light he was looking for in this school. After attending this school for two years, he won ‘second place’ in the competition organized by the school.

Young Cezanne thought he was talented in everything as most young people believed, and besides dealing with painting, he was also involved in music. He even worked on various works of Wagner, one of the greatest composers of his era.

Cezanne, who was enthusiastic with a letter written to him by Emile Zola, who was already in Paris, got caught in his father’s handicap and started to study law.

Of course the flame inside was not extinguished, it just kept burning secretly somewhere deep inside.

Every letter from Emile Zola served as a bellows for this flame. In the end, father Cezanne was persuaded with the help of his mother and sister, and the son Cezanne went to Paris.

Cezanne was pleased to be in the same workshop with Guillaumin and Camille Pissarro, but he was amazed at their undisciplined work and their work whenever they wanted.

He did not find what he expected in Paris, where he came with high hopes.

It is important to note that the letters of Emile Zola, who we know has a ‘talent’ for literature, have also raised the expectation.

At the time he was in Paris, there was no trace of the old excitement between him and Zola, as his dreams of youth had left them.

The only gift he offered as consolation during his stay in Paris was visiting the Louvre Museum. In fact, it was a very good consolation bonus … He would walk around the halls from morning to night, especially watching Renaissance period artworks for hours.

After returning to his hometown, he worked as a clerk in his father’s bank for a year, but once he had entered the art wolf, he continued to gnaw him and not allow him to engage in any other business. With a sudden decision, he went to Paris again. He was sure that the second Paris expedition would be a success.

This time he met young impressionist painters in Paris. Among them were Monet, Renoir, Sisley.

The early times in Paris were full of disappointments. He failed to enter the School of Fine Arts. The paintings he sent for display in the hall were rejected. This failure continued the commute between Paris and his hometown of Aix.

The turning point for Paul Cezanne; he started working with Pissarro. Thanks to him, his messy style became more pronounced and established. He not only listened to Pissarro’s advice but also constantly improved himself. He lived until 1895 as an almost forgotten person.

‘Noticing’ was a very important word in Cezanne’s dictionary.

He used to choose durable fruits in the still lifes he made. Often the fruits would rot, but the picture would not be completed. He would look from different angles and compose compositions in different ways until he was sure of what he really saw.

He worked for 7 years on The Three Bathers painting, which he started in 1879, and died before he could finish it.

Finally, between the years 1883-1895, Cezanne became an artist mentioned among outstanding artists. It has been understood that behind every point that appears in his works is an expression of an idea, every brushstroke.

The famous German poet Rainer Maria Rilke says the following about his works.

“Lots of colors that argue with each other and even fight. But when the soul of each is examined separately, it is seen that they actually get along very well. The bonds of these colors with each other makeup what we call real painting.”

The Card Players by Paul Cezanne

The Card Players is rightly regarded as Cezanne’s most important artwork. It fully reveals Cezanne’s greatness. He managed to reflect almost all the emotions that can be experienced between two people with a simple tool such as a playing card, and he successfully described these feelings in two human bodies.

Paul Cézanne’s The Card Players painting purchased by Royal Family of Qatar for $ 259 million in April 2011, Leonardo da Vinci’s Salvator Mundi painting ($ 469.7 million), Willem de Kooning’s Interchange painting (Approximately $ 300 million) and Paul Gauguin’s ‘When Will You Marry?’, which was sold for $ 300 million in 2015. Paul Cézanne’s The Card Players is the fourth most expensive painting in the world after these paintings. (Wikipedia)

So where does Cezanne’s real significance in art history come from? To explain this, we need to quote from his letter and give an example of a painting.

In his letter to Emile Bernard on April 15, 1904, he included the following statements.

“Allow me to repeat what I said when you were here: deal with nature by means of the Cylinder, the sphere, and the cone, all placed in perspective so that each side of an object or a plane is directed towards a central point. Lines parallel to the horizon give breadth, a section of nature or, if you prefer, of the spectacle spread before our eyes by the Pater Omnipotens Aeterne Deus. Lines perpendicular to that horizon give depth. But for us men, nature has more depth than surface, hence the need to introduce in our vibrations of light, represented by reds and yellows, enough blue tints to give a feeling of air.”

The first sentence in these expressions is particularly important. The geometric shapes used accelerated the birth of Cubism.

In other words, it is possible to accept Paul Cezanne as the father of modern painting. We can see this example of modern art in his still lifes. Here is the Apple Basket made in 1895.

Maison Maria with a View of Château Noir 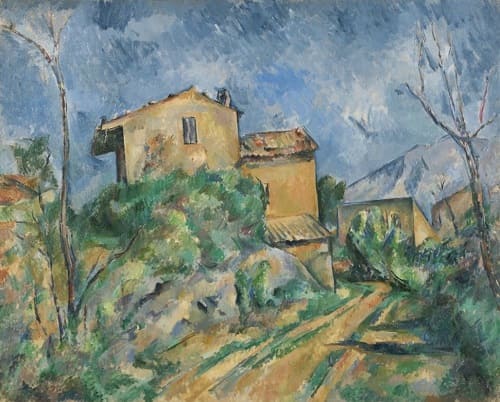