A Short History of Medieval Philosophy

In April 1937, the defenseless village of Guernica was attacked by bombers testing waves of fire and incendiary bombs. This attack created a deep shock in Picasso, as in all of Europe.

Picasso suddenly found himself in the middle of a fundamental battle between good and evil. He had previously been asked to make a large mural for the Spanish Pavilion of the Exposition Universelle (Paris). So Picasso decided to depict the horror of the bombing.

Internationally acclaimed Spanish artist Pablo Picasso gifted his masterpiece ‘Guernica‘, one of the most powerful and iconic paintings in history, to the world just three weeks after the attack.

The enormous artwork is – both literally and figuratively – highlighting the pain and horror of war has become one of the most moving anti-war paintings in history.

8 Things You Need To Know About Picasso’s Guernica

Guernica, 1937 by Pablo Picasso | 8 Things You Need To Know About Picasso’s Guernica

1- Picasso was moved by the article by George Steer.

Picasso, who has lived in France since 1904, had not been to Spain for more than three years at the time of the bombing.

The artist had not witnessed the brutality of the bombing firsthand. But he was deeply impressed by the South African-British journalist George Steer‘s report in The Times on the incident titled ‘The Tragedy of Guernica: A Town Destroyed in Air Attack: Eye-Witness’s Account.‘ Picasso never returned to Spain. 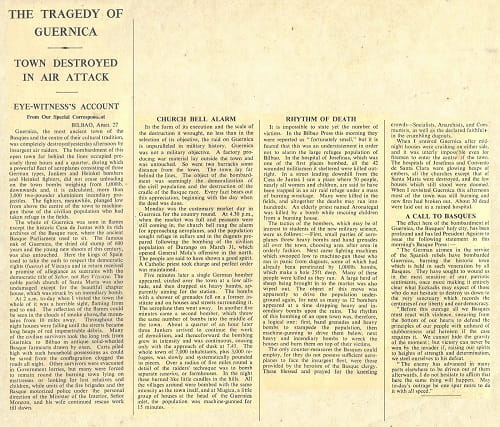 South African-British journalist George Steer’s report in The Times on the incident titled ‘The Tragedy of Guernica: A Town Destroyed in Air Attack: Eye-Witness’s Account.’| 8 Things You Need To Know About Picasso’s Guernica

2- The main characters in Guernica are women.

A closer look at Guernica shows that the main characters in the painting are women.

Women are the main characters in Guernica. | 8 Things You Need To Know About Picasso’s Guernica

A screaming woman with a dead child in her arms is one of the most powerful images in the painting.

Women represent life and pain, and this may be why Picasso used female figures to convey suffering in Guernica.

Among the other women in the painting, one that can be seen trying to escape, another with her arms in the air, the other holding a lamp symbolizing hope.

3- Only grayscale was not used in the painting.

Picasso had thought of adding color to the painting at some point in its development. To test its effect, he added a drop of red tears falling from a crying woman’s eye and other elements using patches of colored wallpaper.

These changes were not permanent, however, and Guernica became one of the most recognizable works of art in art history, using simple shades of gray, white, and blue-black.

Picasso expresses the despondency of the aftermath of the bombing.

4- At first, Guernica was criticized but later was used even by the German Army.

Guernica’s anti-fascist message made it a painting discussed by art lovers and intellectuals from all over the world. For the same reason, it became the target of criticism of fascism advocates.

In the official German guidebook prepared for the Paris’s International Exposition (World’s Fair), it was recommended not to visit Picasso’s artwork.

It described the painting as “a hodgepodge of body parts that any four-year-old could have painted.”

Ironically, years later in 1990, the German army misunderstood Guernica and used it in a recruitment advertisement, with the slogan, ‘Hostile images of the enemy are the fathers of war.’

5- The dialogue between Picasso and a Gestapo officer.

Picasso’s sharp wit was almost as famous as his extraordinary artistic talent.

While living in Nazi-occupied Paris during the Second World War, a German Gestapo officer allegedly told him (in some references he is referred to as the German Ambassador):

Pablo Picasso replied quickly, “No, you did!”

Picasso managed to survive this German occupation and the end of World War II led to his increasing reputation in Paris.

6- Guernica was vandalized by an anti-war activist.

Picasso did not allow the painting to remain in Spain until liberty and democracy were brought to the country. Fearing occupation by the Nazis in France, he loaned the painting to the Museum of Modern Art (MoMA) in New York City in 1940.

During its residency there, anti-war activist Tony Shafrazi (who would later become one of the world’s best-known art dealers) wrote “Kill Lies All” in red spray paint all over the painting.

Tony Shafrazi wrote “Kill Lies All” in red spray paint all over the painting.| 8 Things You Need To Know About Picasso’s Guernica.

He did this to make a statement against the Vietnam War. Fortunately, the paint was easily removed and the painting was restored.

7- Guernica was not adopted by everyone as a masterpiece.

Although Guernica is cited as one of Picasso’s best works, it was not always received with the same enthusiasm – the first criticisms of the painting were particularly harsh.

French painter and communist Edouard Pignon criticized the painting for its supposedly misplaced political message and lack of empathy for the working class.

The French philosopher Paul Nizan, who shared the same feeling, described Guernica as a product of the bourgeois mentality.

8- “A work of art must make a man react… It must agitate him and shake him up.” Picasso

A photograph from the Museum of Queen Sofia (Museo Reina Sofía) in Madrid where Guernica is currently on display. | 8 Things You Need To Know About Picasso’s Guernica

Guernica is one of the most controversial works of all time, loaded with political images, highlighting the pain and horror of war.

With its melancholic grays and painful figures, the painting encourages the viewers to reflect, introspect and empathize.

“A work of art must influence a person … it must provoke and shake him.”