A Short Biography of Pablo Picasso

The 10 Best Art Museums in the World

The Life of Vincent van Gogh and Paintings

In the Middle Ages, which is called the darkest period in European history; Why hasn’t there been a significant improvement in philosophy, art, and science? The inability of philosophy to develop in the medieval period in Europe, the unbearable pressure of religion, and principalities in that age can be blamed. Was indeed all Europe in the Middle Ages completely absent from science, art, and philosophy? What is the main theme of Medieval Philosophy? When did the period called Medieval Philosophy begin?

Ancient Greek philosophy was not only cared about the problem of knowledge.

They approached philosophy in a wide range from morality to politics. They asked questions such as the place of the human in the world, what it means to be human, and sought satisfactory answers.

How did Ancient Greek philosophy, whose main feature was the search for truth in free thought, ended?

The most frightening thing in the period when Christianity was just beginning to spread and dominate was the possibility of pagan understanding infiltrating Christianity.

For this reason, many philosophers and clergymen were killed. This process continued until Emperor Justinian (I. Justinianus) closed the Athens School in 529.

Ancient Greek philosophy, whose main feature was to search for truth in free thought, ended with this decision of Emperor Justinian. It is accepted that the period called Medieval Philosophy started after this moment. In this period, philosophy becomes synonymous with theology. 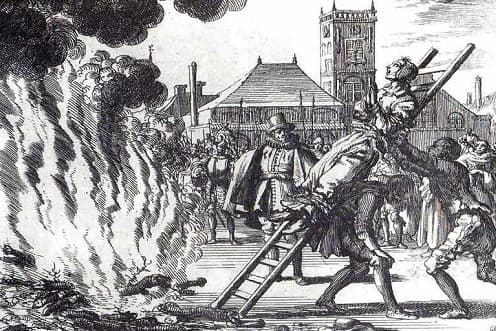 Characteristic Features of the Middle Ages

In order to understand Medieval Philosophy well, it is necessary to consider the Middle Ages very well politically and socially.

During this period, Christianity showed its influence all over Europe intensely. Unity in the Mediterranean disappeared with the dissolution of political unity. Important cities were destroyed, cultural centers disappeared.

In fact, although the Medieval Age seems like an unproductive age, it has a unique importance as every period.

Pagan religions approached this world in a realistic line. Christianity said that this world is worthless and that the truth is a world that is transcendent from here.

The main factor that separates the ages from each other is the changes in the social and economic level and the effects of these changes on the culture.

It would not be right to say that the medieval culture was over, art was reduced to nothing, and philosophy was exhausted. Although all these efforts decreased significantly, they continued by changing direction. Its direction naturally shifted to the religious.

The Christian philosophy of the Middle Ages shows more religious science characteristics than philosophy. This effort stems from the fact that he needs a philosophical basis to validate his Christianity.

The Christian philosophy of the Middle Ages served as a bridge between the Greek-Latin and the modern world. In this age, religion dominated everything.

The Birth of Christianity and Jesus

Christianity emerged in Palestine during the time of Tiberius. Jesus highlighted the love of God and the love of man, purity, and justice. According to the teaching of Jesus, the good would be rewarded with eternal heaven, and the wicked would be infinitely punished.

After Jesus was crucified, his apostles who had gathered around Jesus began to spread the religion of Jesus, spreading across the Roman Empire.

Based on the characteristics of religion, as expected, religion was first adopted by the lower classes. The first to adopt and accept religion were slaves, freedmen, and rural workers.

Christianity was adopted almost everywhere in the collapsing Roman Empire. Overcoming the discussions within itself, Christianity was organized through churches. Established dioceses took on the task of organizing the relationship between man and God and punished anyone who attempted to undertake this duty very heavily.

There was a transition from polytheistic belief to monotheistic belief. Of course, this was not as easy as writing this sentence. It happened over a long period of time. Belief in one god and working for another world outside of this world inevitably required the ability to think abstractly. But reaching the most abstract did not mean reaching everything.

Christianity sought to alleviate Judaism, known for its strict religious rules. It tried to activate an inner look. This means the transition from the old testament to the new one at the religious level.

The Christian faith is shaped by church fathers between II and IV centuries. This period is called the Patristic period. By following the new platonist attitude, they tried to establish the foundations of this religion in the cultural world that is not close to philosophy.

The Middle Ages and Philosophy

As religion developed and settled, it became a marked pattern of oppression with intolerance over a not-so-long period of time.

Religious courts, called the Inquisition, were established to punish the heretics. Intervening between God and the individual, the church became a determining institution for believers. This pressure has spawned a paradigm. Fearing that repression would restore pagan beliefs, the church increased the repression.

Of course, in the Middle Ages, there were great intellectuals in terms of Christianity. One of them was perhaps Saint Augustine, but this is waiting to be written as the subject of another article.