In Degas’ workshop, there is an oversized painting of an artist from the French Romantic School. This painting shows that the god of the gods Jupiter scattered lightning around this giant picture, and next to this giant picture is a small drawing of Edouard Manet that cannot even be called a sketch. This scribble is a small, crooked pear.

A friend visiting Degas’ workshop asks Degas what this oddly shaped pear is looking for next to this giant artwork.

Edgar Degas replies, “I put it (picture “A still life of a pear” by Edouard Manet) there (on the wall, next to the “Jupiter and Thetis” by Jean-Auguste-Dominique Ingres), for a pear-like that would overthrow any god.”

In an age when halls are decorated with giant-sized paintings whose subjects are taken from the depths of history or mythology, it is natural for a pear to be so humiliated.

The artistic understanding of that period gave weight to the content aspect of the work. The more complex and intricate the subject, the more it was liked and attracted attention. In such a period, of course, no one would look at the pear next to a god figure who threw lightning around.

19th-century society, which had reached the peak of its maturity very rapidly, began to decay at the same speed, and this decay inevitably prompted artists to seek new methods.

But it was not easy for the great god to be defeated by a crooked pear. This new understanding, which was opened after many years of struggle, dominated the art world for a while.

Many of the heroes of this war bid farewell to this world without seeing their victory. One of these people who guided modern painting was Edouard Manet.

Edouard Manet was born on January 23, 1832, in Paris. He was the oldest of three sons in a family of good financial situation.

His father was a high-ranking public servant in the ministry of justice(Ministère de la Justice), and her mother was the daughter of foreigner Fournier, a close friend of Bernadotte, who later became King of Sweden.

We can say that the Manet family is a fine example of the humble 19th-century French family.

Edouard Manet went to high-level schools as a child, his father wanted him to study law and become a dignified civil servant like himself. But Edouard Manet did not follow his father’s direction at all.

Edouard was not very interested in the lessons he took in the high-grade schools he attended. He was painting pictures in math class. Thus, every report he received was a disappointment for his father, a staid civil servant.

Edouard Manet, who could not be successful in the lessons, was encouraged by his family to become a navy officer this time.

Edouard Manet, who failed the Naval Academy exams, wanted to try his luck a second time, but he had to do an internship on board. He sailed to Rio de Janeiro during his internship. This long trip did not help Edouard Manet pass the exams either.

And it was finally understood that; Edouard had no intention of doing anything other than the painting he fell in love with. At the beginning of 1850, with the second decision of his family, he started to work in Painter Couture’s workshop.

Edouard Manet and his master Couture never got along. They hated each other, and both were right in their hatred. Couture was an extremely talented painter, but his paintings were within the patterns Manet hated, and these patterns were the only correct one for Couture’s art.

Something was striking in Manet’s painting technique. Manet always worked with light colors and simple lines, discarding most of the details he deemed unnecessary.

When he dealt with a subject, he would leave him unfinished whenever he wanted, pick up a new canvas in front of him and start working on it. For example, he was drawing a portrait in twenty different ways.

Thinking that his works were not valued enough, Manet went to Spain, a warmer country in Europe, thinking that it is not very suitable for the great talent within the city of Paris. He visited historic cities such as Toledo, Madrid, and Valladolid. He studied museums and private collections.

He was very influenced by Spanish culture. In some of his works, the influence of Francisco Goya and Velazquez is undeniable. He used the Spanish style of clothing in some of his paintings.

In summary, young Manet showed considerable independence from the very beginning of his painting education. He would decide what to paint and what not to paint. He refused to do the academy’s favorite subjects, topics of mythology and history, especially the Bible.

He wanted to paint modern life. He wanted to picture people coming out of the opera, going on picnics, ordinary couples flirting.

What Edouard Manet did not throw aside was the tradition of painting.

While many Impressionists completely severed with the past, he did not sever with Michelangelo and Raphael. Manet respected them, using their compositions in his paintings, saluting the masters.

For example, Le Dejeuner sur L’herbe (The Luncheon on the Grass), which is considered to be Manet’s first masterpiece. The work, which shows two men sitting in a clearing in the forest with a nude woman, seems to be directly inspired by Raphael’s painting of the River Gods and Nymphs.

Le Déjeuner sur l’herbe (The Luncheon on the Grass)

And he presented this painting to the “The Salon” that supported by the Academy, which was the only key to success at that time. If the painting was selected and exhibited, the orders would become permanent, but if it was criticized and not liked, your professional life could be over. The year 1863 took its place in history with paintings that Salon rejected, not accepted.

The Salon rejected nearly three thousand works. It was decided to set up another exhibition from the rejected paintings. With this decision, Le Déjeuner sur l’herbe (The Luncheon on the Grass), considered one of the peaks of painting, was also exhibited here. This exhibition was opened as an alternative to the Academy’s Salon.

This alternative Salon was filled with crowds who are interested in painting.

In this alternative Salon, the works were mocked and loud laughter was heard. Guess which work the critics specifically chose to criticize was. Of course, The Luncheon on the Grass.

Never give up! Edouard Manet and Olympia

Well, did these unfair criticism stop Edouard Manet? Of course no. It didn’t even slow Manet down. The painter immediately started working on Olympia. Olympia was a kind of advanced version of The Luncheon on the Grass.

Astonishingly, this painting was accepted to the Salon in 1865, but again it could not get rid of the negative criticism of the critics.

They thought the work was pornographic. They found it objectionable for young girls and women to see the picture.

Manet had at least the sympathy of other painters. In the late 1860s, a group of innovative painters, including Edgar Degas, Claude Monet, Pierre-Auguste Renoir, met regularly in a café. Edouard Manet was a favorite of the group with his friendly and loving personality.

Edouard Manet’s problem with Olympia was that it was naked. We draw your attention that it is ‘naked‘, not ‘nude‘.

It wouldn’t be a problem if it was nude. So what is the difference between nude and naked?

Nudes have no clothes to wear like Adam and Eve in the Garden of Eden. Nudes know no shame, so they are not objects of sexual desire but physical representations of eternal ideals.

On the other hand, ‘naked‘ refers to the conscious removal of clothing. So Olympia is definitely naked.

Naked Olympia also has a swollen black cat at the tip of her feet. This cat most likely symbolizes a stranger in the palace. 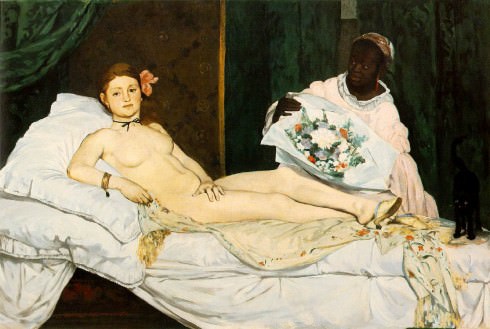 “Some young snobs today, who think that they will be famous by making others ridiculous, do not hesitate to portray a man like Edouard Manet as a hooligan and quack. However, this man is a genius whose value will soon be understood.”

The artistic initiative of the painters mentioned above (Edgar Degas, Claude Monet, Pierre-Auguste Renoir) was interrupted when France declared war on Prussia in 1870.

When France lost the war, a famine arose in Paris. Edouard Manet took his family out of danger and volunteered to join the National Guard.

Manet was almost forty years old and had been a professional painter for almost two decades. He had hardly been able to sell any painting, and in this state, it was difficult to oppose traditional painting.

Paul Duran-Ruel was the name that changed this. He came to Manet’s studio and collected all the canvases and sold many of Manet’s paintings. “Le Bon Bock (Portrait of Emile Bellot)” was the star of the salon in 1873.

That is why he refused to participate in the salon exhibition opened by other painters in 1874. And he reported that he wanted to change the understanding of the ‘The Salon of the Academy’.

A Bar at the Folies-Bergere

In 1870, Manet often suffered from numbness and pain in his legs. He did not take these symptoms seriously as rheumatism, but after a while, it was realized that the disease was the last stage of syphilis.

Manet, who struggled with the disease as much as he could, was also giving the greatest works of his art life. A Bar at the Folies-Bergere was made during this period.

The painting, in which an entire bar is depicted from a mirror, is very valuable in terms of art.

Recommended for you- 10 Amazing Facts About Manet’s A Bar at the Folies-Bergère.

In 1883, Manet was awarded the Legion d’Honneur, France’s largest civilian award. For a long time, he received the reward he deserved just in time because Manet’s illness worsened in 1884 and his left leg became gangrenous. He died 11 days after his leg was amputated.

Still Life with Flowers, Fan, and Pearls by Edouard Manet