Dostoevsky and The Interesting Story of The Gambler

In this work, Edouard Manet revealed the power of one of the most interesting and touching paintings of modern art, conveying the realism of standing in front of this charismatic but tired woman in the bar to art lovers who examine its details.

However, like a spider’s web that traps a fly, Manet’s masterpiece of intricate perspectives never lets us lose sight of it after a single glance.

Just to the right of the young woman we are facing, the strange stance of another figure reflected in the mirror soon draws our attention and we try to understand the geometry of the painting.

This figure, speaking to a stern-faced, top-hatted stranger, actually gives us the feeling of having a hazy exchange with someone who, according to the logic of the picture, is standing exactly where we are.

The eyes of the charismatic barmaid, whose emptiness we initially thought of as indifference, now seem to express how difficult life is, rather than being tired.

A Bar in the Folies Bergère, 1882 by Edouard Manet | Courtauld Gallery, London-UK | 10 Amazing Facts About Manet’s A Bar at the Folies-Bergère

1- The venue in the painting is Folies-Bergère, one of the popular bars of the time in Paris.

Established in 1869, Folies-Bergère was more than a bar back then. It is a music hall where people flock to Paris’ upper and middle class for a great variety of entertainment, including ballet, cabaret, acrobatics, pantomime, operetta, and animal acts. As you can imagine with so many activities, this is also a good place for artists looking for inspiration.

Folies-Bergère, Paris- France | 10 Things You Need To Know About Edouard Manet ‘s A Bar at the Folies-Bergère

2- ‘A Bar at the Folies-Bergère’ was not painted at the bar.

Although Edouard Manet did a few preparatory sketches on-location, he produced this massive masterpiece in the privacy and quiet of his own studio.

3- A trapeze artist almost hides outside the frame!

When you carefully examine the upper left corner of A Bar at the Folies-Bergère, and you’ll notice a pair of green slippers at the ends of two pale legs, standing on a swing.

These limbs belong to an acrobat performing for the upper and middle-class guests of the bar.

After this detail, you can be sure that you will examine Edouard Manet‘s work from a different perspective.

To the right of the red wine, you’ll see a brown bottle with a red triangle on its label, which was the UK’s first registered trademark.

The distinctive red triangle logo painted on the label of these bottles is the first trademark officially registered in the UK, established in 1877, just five years before Manet created his painting: Bass Brewery. | 10 Things You Need To Know About Edouard Manet’s A Bar at the Folies-Bergere.

This bottle is the logo of Bass Brewery, founded in 1777 and still in production today. This logo featured in this image belongs to a brewery founded by William Bass just 5 years before Manet painted it.

Edouard Manet has hidden this detail in this painting, unaware that he is the inventor of product placement, which is one of the most frequently used advertising techniques nowadays.

Manet’s model for the barmaid was a woman named ‘Suzon’, and that’s probably where she met Manet.

Whether the character in the painting is not just a barmaid but also a prostitute is a matter of academic debate. (It is often thought that the oranges were allegedly associated with the trafficking of women and girls at the time, and the flowers on the neck were also added – as a sign of evening availability.)

Recommended for you- Allegories and Symbols in Paintings

The expression on the woman’s face is one of the most famous and mysterious in art.

Manet has done another painting of this mysterious woman before. In 1881 he painted a portrait of Suzon named ‘Study of the barmaid for Le Bar des Folies Bergeres.’

6- The sincerity reflected in the mirror can be an illusion!

Did Manet design the stern-faced, top-hatted stranger in the painting as the viewer?

Or did Manet use a more clever method than we thought?

Is this really an illusion or is it just a strange, disturbing, wrong point of view?

Art historian Malcolm Park created a photo reconstruction and diagram to map where the bar girl, hat customer, and spectator would actually be at the bar.

Park’s findings showed that the viewer was not the man pictured, but rather a person coming from the right and thus not reflected in the mirror. This perspective has brought the distance between the reflected man and woman closer and visually created a false sense of intimacy in the mirror.

Even these studies will never answer our questions about Manet’s emotional intention in the painting!

7- X-rays revealed that Manet made a major change during the creation of the work.

Scans made with X-Rays; showed that Manet first drew the barmaid, but unlike her current stance, with her arms crossed at her waist, her right hand holding her left forearm above the wrist.

8- Manet may have been influenced by Las Meninas!

Diego Velazquez is one of the most creative and realistic painters ever after Caravaggio, which Edouard Manet defines as the painter of painters. The light, optics, shadow, composition, adaptation, and visual power in his works are extremely impressive.

Las Meninas, Diego Velázquez’s unconventional portrait of royalty from 1656, has a perspective inspired by long discussion and commentary.

Recommended for you- Diego Velazquez and Las Meninas

Manet was a noted admirer of the 17th-century Spanish painter’s works. Art historians suspect A Bar at the Folies-Bergère was his take on that strange and seemingly Velázquez’s Las Meninas.

Las Meninas, 1656 by Diego Velázquez | 10 Amazing Facts About Manet’s A Bar at the Folies-Bergère

Some art historians tell us that her potentially flawed outlook requires a two-side examination of this woman’s stance.

In the reflection, she appears to lean in, being engaged and even potentially flirtatious with her customer.

In the other reality; ‘Suzon’ is at best ambivalent to his presumed attentions.

The real question in our minds is, did Edouard Manet with his unique point of view, want to put ourselves in Suzon‘s for both situations?

10- A Bar at the Folies-Bergère was Manet ‘s last major work.

Manet’s great career was studded with groundbreaking works that bridged the gap between Realism and Impressionism.

When the Parisian art scene couldn’t grasp his greatness, he spent his own money to fund his exhibitions.

Self-Portrait With a Palette, 1879 by Edouard Manet | 10 Amazing Facts About Manet’s A Bar at the Folies-Bergère

In 1882, A Bar at the Folies-Bergère made its debut at the prestigious Paris Salon.

The artist’s health was fading as he struggled to complete the piece that would become one of his most acclaimed. Manet died at age 51 the following April with A Bar at the Folies-Bergère back in his studio. 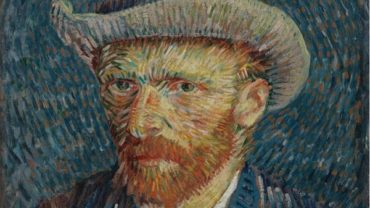