8 Things You Need To Know About Picasso ‘s Guernica 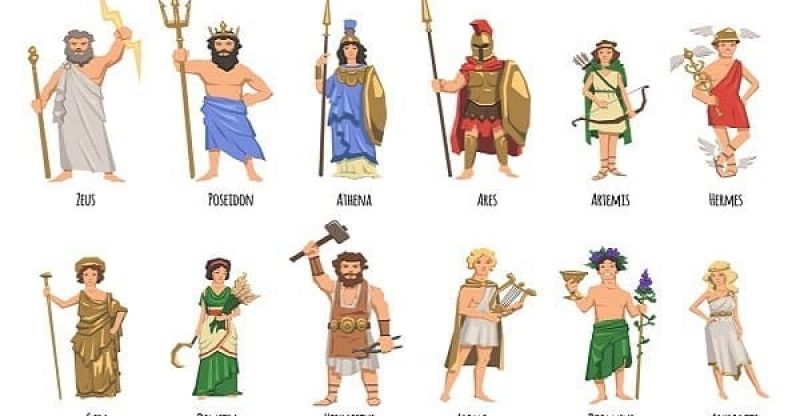 Ancient Greek religion was based on the belief that there were twelve gods and goddesses that ruled the universe from Mount Olympus, in Greece.

In ancient Greek religion and mythology, the twelve Olympians are the main gods of the Greek pantheon, often considered Zeus, Hera, Poseidon, Demeter, Athena, Apollo, Artemis, Ares, Hephaestus, Aphrodite, Hermes, and Hestia or Dionysus. They were called the Olympians because, according to tradition, they lived on Mount Olympus.

Although Hades was a great ancient Greek god and was the brother of the first generation Olympians (Zeus, Poseidon, Hera, Demeter, and Hestia), his realm was the underworld far from Olympus and is therefore not generally considered to be the twelve Olympians.

On the top of Olympos, the sacred mountain of the Greek Peninsula, the gods of Greek mythology living among the clouds were enjoying themselves in a palace built by the blacksmith god Hephaistos. The gods invariably feasted, drank wine, made love to one another or to mortals they had abducted from the face of the earth.

The lightning-throwing Zeus was the accepted leader of all the gods. The grouchy gods were constantly bickering with each other. In these aspects, they were very similar to the Greeks who believed in them.

These gods, who generally wandered in the sky, were called sky deities. (Except Poseidon, because according to mythology he lived in the seas).

It is estimated that belief in sky gods was carried to this region by Indo-European invaders who ravaged the entire Aegean around 2000 BC.

It has been determined that Zeus, Poseidon, and Hera were found in the tablets found among the remains of the Mycenaean Civilization, which belong to 1200 BC.

Estimates point to the Late Bronze Age when the Greeks began worshiping these gods.

Of course, it did not happen in a day that the Greeks started worshiping these gods. Among the ancient gods of the Greeks were chthonic gods who were believed to live underground.

Although not immediately as described in the myths, the gods of Olympus became the definitive ruler of the skies, perhaps not the earth. The tendency of paganism was to include the old gods into the pantheon instead of rejecting them completely.

Who are the 12 Greek Gods and Goddesses?

Now, let’s get some brief information about some of these Greek gods;

Among these gods, there were three gods who were the most respected and formed the kingdom of gods.

Zeus, the king of the gods, Hera, the wife of Zeus and the goddess of marriage, and Athena, the goddess of arts, wisdom, and crafts, were born from the head of Zeus.

Zeus was the most powerful of the Greek gods and goddesses. As god of the sky and king of Olympus, his temper affected the weather.

A perfect blend of power, wisdom, and grandeur, Zeus resided on Cloudy Olympus, from where lightning bolts were thought to be fired at enemies.

Zeus also rules over all other gods and goddesses, so he was worshipped in most ancient Greek homes through altars, shrines, and daily offerings.

Zeus had the power to change his shape and he was also married to the queen of the gods, Hera.

Zeus was also the father of justice and mercy. He was also seen as the protector of foreigners. He was the ultimate guarantor of the law among mortals and divine law. However, his own behavior did not set a very good example.

He was the youngest son of Kronos, who devoured his sons for fear of taking their place. His mother, the Rhea, hid Zeus on Mount Ida, located on the island of Crete. Zeus was raised and bred here by the nymphs.

Later, Zeus forced his brothers to vomit, which his father swallowed. He dethroned his father. He crushed the titans and created his own rule.

He divided the world among his brothers. Poseidon took the seas and Hades the underground.

Zeus married his sister Hera, but continued to be a womanizer and seduced many mortal and immortal women. Many of these women had children.

Among the women Zeus obtained by transforming his body are Apollo and Leto, the mother of Artemis. There was Danae, whom he seduced in the form of a bull, and Europa, from which King Minos of Crete was born, who he appeared to be in the form of a rain of gold.

Leda, whom Zeus tricked into taking the form of a swan. After this relationship, Leda gave birth to the beautiful Helene, who caused the Trojan war.

Semele, which Zeus burnt by showing himself so majestically. (However, baby Dionysus survived.)

Ganymede, the handsome prince from Troy, who was the lover of Zeus, who was benevolent to the gods in Olympos, was among those whom Zeus stole his heart.

Zeus was worshiped in many places in ancient Greece, especially in Olympia, where games were held in his honor.

An image of Zeus made of gold and ivory by Pheidias is in the main temple of Olympia. Some poets who lived in Ancient Greece praised Zeus so much that; they almost brought him to the rank of one god, moreover, they ignored all the cruelties he did while he was the king of the gods.

The sister of Zeus, whom he forcibly made his wife.

She is represented as the queen of Olympus right next to Zeus.

It is not possible to describe Hera as beautiful, but one thing is certain, Hera is magnificent. She often wears a threefold crown, which reveals Hera’s connection to the Great Goddess who was worshiped before the gods of Olympus.

Hera is accompanied by a peacock, and Hera is a goddess famous for her anger. This anger is justified because as you have read above, Zeus is a womanizer. It is not possible for Hera to understand these escapades, but she directs her anger at the women whom Zeus is debauched.

Hera (Juno) | Ancient Greek Gods and Goddesses | Hera was one of the most important goddesses in ancient Greek mythology.

She threatens Zeus’ mistresses with death. This anger sometimes cost Hera dearly, even once the king of the gods, Zeus, hung her upside down from Olympos. Even such situations do not detract from Hera’s charisma, and she has always been on the side of Zeus.

After Prince Paris sneered at him, she intervened in the Trojan War and affected the course of the war. Hera is the mother of Ares, the mighty and fierce god of war, and Hephaestus, the blacksmith god of Olympus.

Hera was highly revered as the god of marriage and childbirth in Ancient Greece. She is especially honored at Argos and Samos, where one of the greatest Greek temples is located.

Athena Parthenos (Virgin), born from the forehead of Zeus, was the most distinguished and bright child of Zeus. In Athens, she was often depicted as a warrior goddess with her spear and shield.

She won a battle with Poseidon and became the protector of the city. Poseidon created a spring of water, and Athena created an olive tree, symbolizing peace and abundance.

While Athena is the goddess of wisdom, education, and art, the worst part is that she inherited the arrogance of her father Zeus.

Often shown with an underground serpent and an owl representing wisdom behind her, the goddess also mocked the ugly snake-haired Medusa, whom Perseus had killed.

The Athenians saw Athena as the incarnation of their city and celebrated the goddess’s festival. However, Athena was also worshiped in other cities. For example, in Syrakousai, Sicily, a beautiful Temple of Athena (Syracuse), located inside the current cathedral, has survived.