15 Facts You Might Not Know About The Mona Lisa

Workers of all lands unite! Have you ever heard of this political slogan engraved on Karl Marx’s tomb? This slogan was also used as the official state motto during the Soviet Union (USSR) period. Now, based on this political slogan, we will try to examine the life, family, and philosophy of Karl Marx.

Workers of all lands unite! | Who is Karl Marx? | Karl Marx – Life, Theory, and Philosophy

Who is Karl Marx?

The Influence of Hegel on Marx

The most important of the social philosophies that emerged in this period, based on science, is of course the philosophy of Karl Marx.

It is a philosophy that puts a great emphasis on economics, history, and sociology and has affected the people living in that century as well as the next generations.

It has faced numerous criticisms both at the time of its emergence and afterward.

Besides, from the moment of its emergence, beyond acquiring a large readership; this philosophy, which has been adopted by the masses and regarded as the main pillar of left-wing politics, continues its influence today.

It is an indisputable fact that these philosophical views of Karl Marx were, like all other philosophies, a philosophy that was nourished from different sources and even distant views.

Marx’s philosophy is associated with Hegel’s philosophy, partly because of its method commonality. However, it is always a mistake to see one of the two philosophies as born from the other.

Karl Marx did not establish his philosophy by adopting Hegelianism with everything but also directed various criticisms at him.

Both philosophies are inherently contradictory to each other.

Hegel’s apparent idealism and Marx’s materialism stand in stark contrast when considered side by side. Yet it is possible to see traces of Hegel, and more generally German idealism, in Marx.

The Thoughts That Affected Karl Marx

Many thinkers were influenced by Hegelianism. Hegelian philosophy was held more by a political interpretation by its successors, and right-wing Hegelians were separated from left-wing Hegelians.

Leading right-wing thinkers is the historian of philosophy Karl Rosenkranz (1805-1879), who gave lectures in Halle and Königsberg.

Left-wing politics have adopted Hegelian thinking more in terms of method. Among them, of course, is the Hegel critic Ludwig Feuerbach. Another is David Friedrich Strauss.

Strauss, one of Hegel’s students, studied in Tübingen and became a professor at this university.

In 1835 he published a book called Das Leben Jesu (The Life of Jesus), in which he showed Jesus as a fairy tale person, so he was fired from his job. He was also criticized for making a historical critique of dogmas. After this incident, he broke off from Christianity.

One of the thinkers who had a great influence on Marx was the economist David Ricardo (1772-1823). As the child of a Jewish banker family immigrated from the Netherlands to England, Ricardo worked for his family for a while, then broke off ties with all of his relatives, brokering on his behalf and earned big money.

Having good relations with all the economists of his time, this interesting personality entered the House of Commons in 1813. The most important of his works are on the Principles of Political Economy and Taxation.

David Ricardo dividing society into three classes, landlords, capitalists, and workers, explained the value of goods by the quantity of labor required for their production and stated that this law applies not only to the primitive times of society but also to the present.

Ricardo thought that any intervention was fatal to economic life.

The Life and Family of Karl Marx

His father was originally a Jewish lawyer who later became a Protestant. Karl Marx started his high school education in Trier in 1830.

Members of this community believed that political emancipation could only be achieved when they became conscious.

Karl Marx returned to Bonn in 1842 and joined the writing society of the Rheinische Zeitung, which the libertarians had founded in Cologne.

The board brought him to the post of editor-in-chief.

In February 1844 he began to issue the Deutsch-Französische Jahrbücher.

When he was expelled from Paris in 1845, he settled in Brussels, where he wrote the Mang’fést der Kommunistischen Partei (The Communist Manifesto) with Engels in 1847. He then moved on to London. Despite Engels’ friendship and help, he had a difficult time with his family in London.

The First International was founded under the name of the International Working Men’s Association at a mass meeting in London by Karl Marx.

He traveled for his health, but failed to recover from lung disease and passed away in London in 1883. 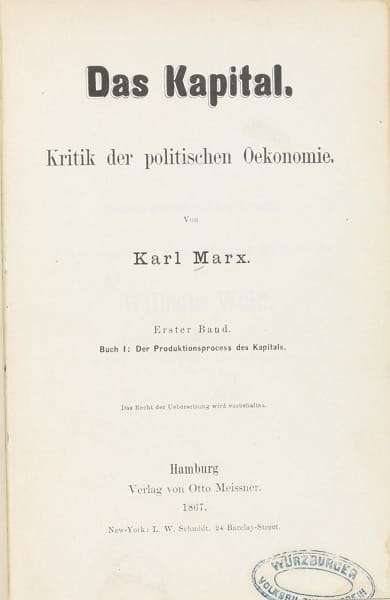 Karl Marx took only his method from Hegel and transformed his idealistic side into a materialist conception. In other words, he preserved dialectics and threw out idealism.

For Marx, as for Hegel, life was made up of contradictions, so the dialectical argument took place in a triple development of opposition and composition. However, Marx also avoided the old materialist views he found shallow.

Marx argued that the continuous transformation that Hegel envisioned in the soul also exists in matter. Thus, historicity gained a decisive meaning for Marx as well. Accordingly, the Marx doctrine also meant historical materialism in another sense.

Karl Marx evaluated life at the level of matter through physical-chemical phenomena. Accordingly, it was necessary to look for the origin of thought in organic terms. The human world based on this matter was manifesting itself in a true sociality.

In that case, while thinking about social life, one had to transform it. In this context, it would be correct to think that especially the infrastructure conditions, economic living conditions, or technical activities aimed at facilitating life, transform the superstructure values.

Marx thus recognized that life has a certain guiding power over thought.

The materialist dialectics’ aim was to deal with the construction and transformation conditions of human societies as historical materialism.

Karl Marx argued that ‘the existence of classes depends on the stages of historical development determined by production’. Economic factors lead the way in the social transformations that history has shown us.

This historicist conception was that societies were divided into classes in all periods of history.

Social classes emerged in every age according to economic values ​​and specific age conditions. According to this, all social classes were distinctive with the efficiency it produced in production. This situation had necessarily brought about class conflict throughout history.

In our age, bourgeois capital was not productive, it was the working class.

Karl Marx argued that capital was dead labor, saying it was a vampire. Accordingly, the working class was supposed to destroy the bourgeois order. Class conflicts were the driving force of transformation.

Class conflict was not an ideal or an aim, but an undeniable reality and necessity.

These conflicts would result in the victory of the working class or, in other words, the proletariat.

So with the Revolution.

This revolution would bring to a just society, where everyone works with the means of production belonging to all. Thus the society of needs would become a society of liberties. But the critical point was that for this all workers had to unite.