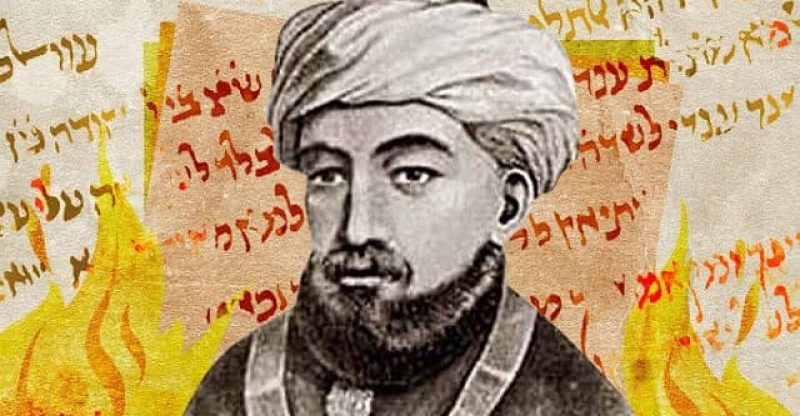 Moses Maimonides (Ibn Ma’mun) was born in Cordoba in 1135. After receiving his primary education from Jewish rabbis, he received training on the science of his time from Andalusian Arab scholars.

In the first years of his youth, he had to leave the city of his birth with a relative due to the pressure of the Almohads. After visiting many cities for 12 years, he settled in Magribe (Morocco).

In 1165 he went to Akka and then to Jerusalem. Finally, he settled in Egypt and lived there until his death.

The life and works of Moses Maimonides

He became the physician of Fadhil al-Baisami, the vizier of Saladin. He showed all his intellectual activities in this period. He gained a great reputation not only as a physician but also as an astronomer and philosopher.

The most important of his works, all of which were written in Arabic, is Delil ul-hairin.

All of Ibn Ma’mun’s works and especially the above-mentioned work represent complete rationality. According to that; Aristotle’s philosophy, which he learned from Farabi and Ibn Sina, will be able to solve all the problems of man, nature, and God. These solutions generally do not reconcile with the holy book, namely the Old and New Testaments.

For this reason, Ibn Ma’mun tries to connect the aspects created by rational philosophy to faith. According to him, there can be no contradiction between the truths based on revelation and the truths discovered by the human mind, which are also God-given. For him, the contrast is only appearance.

According to Maimonides, it is the wrong way to understand the texts of the Torah and the Bible word for word. This opinion is already present in the Bani Israel tradition. Ibn Ma’mun revived it. Ibn Ma’mun made this reconciliation by deepening the idea of substance in Aristotle’s philosophy and his metaphorical interpretations.

In this way, he spiritualized all the human likenesses of the scriptures. There he put forward bold theories about God’s attributes, creation, man’s special will, the root of evil, prophecy, principles of psychology and morality, and the meaning and application of shari’a. But he never remained true to Aristotle to the last point. For he knew that if he did so, he would endanger the essential doctrines of religion. Instead of abandoning his belief in order not to fall into this situation, he criticized Greek thought from time to time.

Despite this, he could not escape the attacks of people with deep Jewish beliefs. They considered his brave opinions on angels, miracles, prophecy, and matter to be against religion.

After his death, some Muslim philosophers benefited from his opinions. His works were translated first into Hebrew and then into Latin.

Along with Ibn Rushd, he is the most discussed philosopher in the west.

In 1234, the Catholic Church ordered that Maimonides’ books be burned.

He had opinions that left deep impressions on many of his successors, but the greatest influence was seen on Spinoza in the 17th century, including all his peripatetic influences.

Just like the early theologians, Ibn Mamun rejected the human-like attributes of Allah. He was of the opinion that we could only know him by his negative attributes. According to him, the world is a whole and is like a single individual. There is no space in it. The earth is surrounded by water, water by air, air by fire, and fire by the fifth body (that is, by the ‘prisoner’ that constitutes the substance of the celestial spheres).

In the world, which is a single individual, is composed of many individuals. These are listed as inanimate, animate and spirited. The highest rank is the spirited human individual, whose dominant power is the mind. However, he thinks that he has the same form of body, soul and mind as an individual in all his spheres.

Moses Maimonides’ Opinion of the Origin and Destiny of the World

He explains and criticizes Ibn Mamun’s opinions on the origin and destiny of the world, and tries to derive his own compositional opinion from there.

The universe was created in its entirety from absolute nothingness by Allah. First, there was only Allah, and apart from him, there were neither angels, nor spheres, nor things inside the celestial spheres. Later, Allah created these beings out of nothingness with his free will. Time was also among the created things. Because it consists of movement and accident. If it is said that “Allah existed before he created the universe”, the word first here indicates time. However, it exists without any registration. The word ‘before’ here should be understood metaphorically.

It is the conjecture of all the philosophers that we have heard and whose ideas we have learned. They say that it is unacceptable for Allah to create something out of non-existence, something cannot be mixed into absolute non-existence, that is, it is impossible for anything with matter and form to be born without the presence of matter, and to die by mixing into non-existence.

To see Allah’s ability to do such a thing is to combine two opposites at the same time. This is nothing but combining the impossible with Allah. Therefore, according to them, there is a beginningless substance like Allah, which does not mean that he is at the same level as Allah. According to them, the world has come into existence and will disappear. But it did not come out of nothingness.

It belongs to Aristotle and the people who commented and interpreted his ideas.

According to Aristotle and peripatetics, nothing material can come into being without a pre-existing substance. But they also accept that the heavens will not be born or perish. This whole universe has always been and always will be. Time and motion are beginningless; they are not born and do not deteriorate.

In this book, Moses Maimonides claims that Aristotle could not prove that the universe is beginningless and infinite. He made this claim as a result of his examination of his book called Physics.

From this, he concludes that the creation of the universe can be asserted in principle. By emphasizing the idea that Allah is the cause and the universe is a work, he arrives at the idea that creation is not ‘voluntary’ but ‘necessary’, that there is a relation of necessity between Allah and the world, where it is clearly seen that Farabi is completely based on the idea of ​​necessary existence.

Moses Maimonides also touched upon the problems of contradiction between natural laws and miracles.

Nothing in nature will change. Everything has happened and will come in absolute necessity and order. When viewed from this window, how should one look at the miracles that disrupt the existing order?

Ancient Jewish scholars said that they were created by Allah in their miracles. Ibn Mamun disagrees with this idea. He followed Aristotle’s ideas up to a point in this matter.

This universe has existed and will exist in the order established by Allah. But Allah always has the power to change and destroy the order He has established. Since the universe has a beginning, it will definitely have an end.

Moses Maimonides gives the following sentence from the holy book for the evil in man.

“I form the light and create darkness, I bring prosperity and create disaster; I, the LORD, do all these things.”

Allah’s true influence is good because he is existence. Since all beings in the universe pass from non-existence to existence, they are filled with deficiency and poverty. That’s why there is more evil than good in the universe. Here, the smallness of man can be understood.

There are three kinds of evil;

1- Things that result from the birth and degeneration of human beings: diseases, and physical disabilities.
2- There are evils that people do against each other: brutality, and cruelty.
3- It is the evil that is caused by the actions of each person himself. People complain a lot about such evils, but few think that they can have a share in these evils. These evils leave people in the face of a new problem, which is the problem of morality.

The moral problem leads to the religious problem. The responsibility of man gives birth to the idea of ​​sin in him. From here, the situation and problem of man before Allah arises. Here Ibn Mam reviews various opinions.

First, it is the view that accepts coincidence; This view belongs to Epicurus.

The second is the view that argues that some events depend on a superior order and some on coincidences; Aristotle is the defender of this view.

The third is the view that argues that nothing in the universe is the result of coincidence and that everything depends on a will and plan; According to Ibn Mamuna, this view was defended by the Ash’arites.

The fourth opinion is the opinion of those who accept the processing power of humans. For this reason, according to them, Commandments and Prohibitions, punishments and rewards are appropriate. They say that all of Allah’s actions have wisdom and that injustice cannot be attributed to him. The Mu’tazila are of this opinion.

Moses Maimonides disagrees with either of these views.

According to him, all animal species act of their own will, and this occurs depending on the eternal will of Allah. However, their special will increase as they rise toward human beings.

With this power, man distinguishes good from evil. According to Ibn Mamun, there is both necessity and coincidence in the universe. However, punishing or rewarding people’s actions according to good and bad deeds is the work of Allah’s wisdom and discretion.

It is impossible for anything not to be known to Allah. But Allah’s knowledge is with his wisdom and discretion. Thus, he is of the opinion that he is freed from the trouble of various opinions that leave responsibility and punishment unanswered between the special will of man and Allah’s will.

It is possible to see that the Jewish philosopher is closer to peripatetic philosophy than to theologians.