A Short Biography of Pablo Picasso

Throughout history, animals have been attributed to strong mythological, cultural, and religious meanings all over the world. These attributed meanings deeply affected the artists living in that geography. Undoubtedly, because artists are a part of society, the sociological situation of the society, the religion they belong to are reflected in the works of the artists. For this reason, the place of Allegories and Symbols in Paintings is very important for art.

Let’s try to explain the question of how the artists attribute meaning to the animals, fruits, and objects they use in their compositions and where are the sources of these metaphors under the title of “Allegories and Symbols in Art” with some examples in this article.

Allegories and Symbols in Paintings

Monkeys have been used to satirize people’s pretense, folly, and worthlessness in paintings. 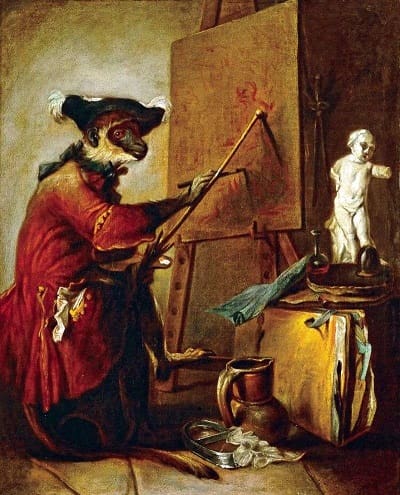 Monkey by Jean-Baptiste-Siméon Chardin | Allegories and Symbols in Paintings

Donkey is often seen as lazy or stupid in mythology. In the history of art, it has been an animal used for satire, although not as much as the monkey.

For the ancient Greeks, the bull did not represent brutality but rather symbolized power.

Jupiter, one of the Ancient Greek Gods, disguised as a bull to encroach on Europe. So the bull can represent the European continent. With the same logic, ‘crocodile’ can be used to represent Asia and Africa. But Africa is generally represented by ‘elephant’.

The cat is depicted as a peace-loving, pet animal in many paintings, but when portrayed aggressively ready to leap, it depicts a disaster to come.

For example, in Edouard Manet‘s Olympia, there is a black cat with fluffy feathers. This cat most likely symbolizes a stranger in the palace. A black cat is often associated with evil.

Dog representing loyalty in Van Eyck’s The Details Of The Arnolfini Portrait.

Lamb is one of the animals most loaded with religious meaning in artworks. Usually, it symbolizes Jesus. It may also represent the believers of Jesus under the patronage of the good-hearted shepherd.

Fish, one of the first symbols of Christianity, is one of the animals that Christians attach special importance to. Because the Greek word ‘Ichthus’ for fish was composed of the initials of Jesus CHristos, THeou Uios Soter (Jesus, Son of God, Savior).

In the art of painting, the goat has both mythological and Christian meanings. This animal was sacred to the Roman supreme god Jupiter.

The lion has been depicted as the king of beasts since ancient times. Representing strength, courage, and endurance, the lion has represented many kingdoms, empires, and dynasties.

If it is depicted calmly with other animals, it may symbolize heaven or the golden age without discord.

In the Old Testament, there is the phrase ‘The lion, which is the strongest of animals, who never gives up on anything’. For this reason, it has been seen that he was put on door thresholds as a guard.

It is an animal thought to have life resistance and medicinal powers.

Caduceus, a snake wrapped around a rod, was the defining feature of Aesculapius, the god of medicine. 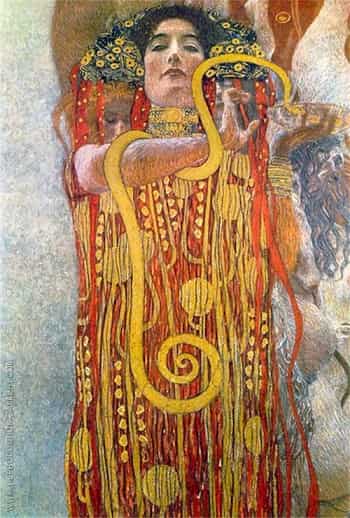 Medicine, 1900-1907 by Gustav Klimt | Allegories and Symbols in Paintings | Snake

Recommended for you– Gustav Klimt Artworks and Famous Paintings

This wand given to Mercury by Apollo is used as a symbol of the medical profession today. In paintings representing the charm, the snake is often shown with a female head.

It is the forbidden fruit of the tree of wisdom. The reason why it is mentioned like this is that the word ‘malus‘ in Latin means both apple and evil.

Apple represents the first sin and downfall. It is generally used as the defining feature of air.

This fruit symbolizes the bleakness of autumn and winter, and the birth of spring and summer. In Christianity, the pomegranate is the symbol of resurrection.

The bundle of corn symbolizes the body of Jesus in Christian art.

It is used symbolically to refer to a prisoner, as in real life.

In seventeenth-century Europe, both lower and upper-class people enjoyed playing cards. But playing cards often imply laziness and bad habits, as clergy and self-identified morals considered it a sin.

Recommended for you– Painting Styles of Famous Painters

Beware of Luxury (“In Weelde Siet Toe”), 1663 by Jan Steen | Allegories and Symbols in Paintings

In the art of painting, dice represent fate.

As can be expected, it is the defining feature of the concept of justice.

It is often associated with melancholy. On the one hand, it is the defining feature of astrophysicists, geometry scholars, and architects.

The spear symbolizes strength and endurance.

An umbrella or sunshade can be used as an indicator of royalty or patronage.

For example, the Holy Roman Emperor might be holding an umbrella over the Pope to show his loyalty.

It means divine light and wisdom. Caravaggio often included an external light source in his paintings to imply divine enlightenment.

The Calling of St. Matthew, 1599-1600 by Caravaggio | Allegories and Symbols in Paintings (A fine beam of light entering the room in the same direction as Jesus.)

Recommended for you– 10 Amazing Facts About The Calling of St. Matthew by Caravaggio

Candles that have an important role in many religions, communion candles in Christian art represent the existence of Jesus, and the seventeen-armed candlestick represents Judaism. The candle represents the temporality of life in Flemish art in the 17th century.

It represents prosperity and success, especially in works involving victory. On the other hand, winds are variable and sailing can also represent the variability of fortune.

Artists have been trying to tell us something for centuries, sometimes they want to activate our feelings and sometimes our minds. We learned about some of the Symbols and Allegories they used as a tool for this effort. I think we are closer to understanding artworks now.