8 Things You Need To Know About Munch‘s The Scream

The 10 Best Art Museums in the World 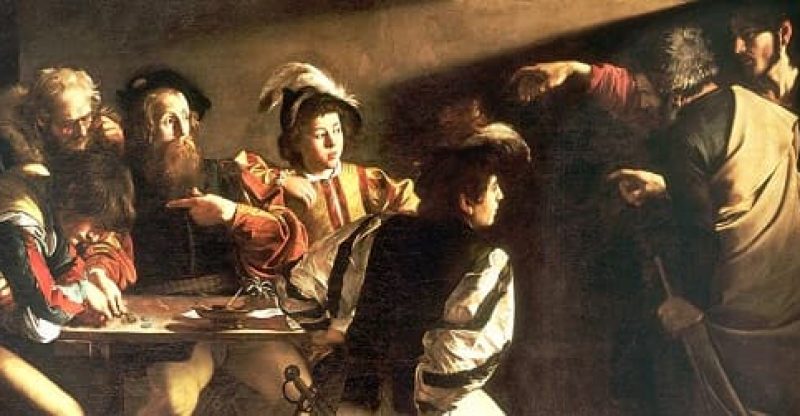 no comments
Share Tweet Pin it
Home
Art
Art History
10 Amazing Facts About The Calling of St. Matthew by Caravaggio

The Italian painter Michelangelo Merisi da Caravaggio, who lived in the sixteenth century, is regarded as one of the most influential artists in Christian art. Caravaggio is one of the pioneers of baroque art with his flawless use of light and shadow and his dramatic approach to the arrangement in his paintings. We aimed to collect what you need to know about The Calling of St. Matthew, one of the best examples of this, under ten titles. You can also contribute to our content with your comments.

10 Things You Need To Know About Caravaggio’s The Calling of St. Matthew

1- The Calling of St. Matthew Has Been On Exhibited In The Same Place For More Than 420 Years.

Since Caravaggio’s The Calling of St Matthew was completed in 1599-1600, it has been proudly exhibited in the Contarelli Chapel, in the church of San Luigi dei Francesi in Rome, for 420 years.

2- Caravaggio Was The Church’s Second Choice to Decorate the Chapel.

The late Cardinal Matteo Contarelli (for whom the chapel is named) bequeathed a certain amount of money to decorate the chapel.

Cavaliere d’Arpino (also known as Giuseppe Cesari), a Mannerist painter who was famous in Rome at the time, was given the job to decorate the chapel. However, after Giuseppe Cesari had completed some of the frescoes on the ceiling of the chapel, Cavaliere realized he was overbooked and canceled the deal.

A portrait of Giuseppe Cesari by Ottavio Leoni in 1621. | 10 Amazing Facts about The Calling of St. Matthew by Caravaggio

This renunciation resulted in one of Caravaggio’s most admired works.

3- The Painting of The Calling of St. Matthew Depicts a Scene from Matthew’s Contribution to the Bible.

Matthew was a greedy and immoral tax collector before being called by Jesus to join his apostles.

In The Calling of St. Matthew, Caravaggio depicts the moment written about in the Gospel of Matthew, chapter 9, verse 9, which reads: “Jesus saw a man named Matthew at his seat in the custom-house, and said to him, ‘Follow me,’ and Matthew rose and followed Him.”

4- Dimensions of The Painting.

Caravaggio used the contemporary fashion of the late 16th century to better convey the scene to his audience, rather than dressing the figures in his work with the clothes of the period he depicted.

The men’s finery combined with the way they hover like vultures over the coins and meet in the darkroom displays their apparent wickedness.

*An Anachronism is a chronological inconsistency in some arrangement, especially a juxtaposition of persons, events, objects, language terms, and customs from different time periods. The most common type of anachronism is an object misplaced in time, but it may be a verbal expression, a technology, a philosophical idea, a musical style, a material, a plant or animal, a custom, or anything else associated with a particular period that is placed outside its proper temporal domain.

6- Caravaggio May Have Had Help From The Camera Obscura* In Completing His Painting.

An exhibition held at the National Museum of Piazza Venezia in Rome in 2011 explored the theory that Caravaggio used an optical device to project paintings on canvas.

Matthew is pointing with his left hand | 10 Things You Need To Know About Caravaggio’s The Calling of St. Matthew

It’s speculated that this technique explains why the maybe-Matthew is pointing with his left hand—the projected image would have been reversed.

* A camera obscura is a darkened room with a small hole or lens at one side through which an image is projected onto the wall opposite the hole.

Recommended For You: 10 Places from Famous Paintings That You Can Visit in Real Life.

7- Caravaggio May Have Been Inspired by Hans Holbein.

Art historians have noticed a similarity between the tax collectors in Caravaggio’s The Calling of St. Matthew and the staging of gamblers in woodcarving prints of the German painter.

In Hans Holbein’s The Gambler (1545), a man is so busy counting the wrongful gains that he doesn’t realize that death and the devil are claiming one of his friends. The similarity in Caravaggio’s painting is that a greedy tax collector focused so much on his money and did not notice the coming of Christ.

A man is so busy counting the wrongful gains that he doesn’t realize that death and the devil are claiming one of his friends. | The Gambler, 1545 by Hans Holbein.

8- It’s Not Clear Which Man Is Actually Matthew. There Are Some Theories About That.

Jesus and Peter are standing to the right of the painting, pointing to Matthew first. But the question of who is the addressee of the sign and which of the men on the left will soon be a saint has always been viewed with suspicion.

However, the most likely interpretation is that the bearded man who bends his index finger slightly towards his chest is Matthew. This theory will explain why bright light shines on the face to show that heaven is chosen by its light.

Yet other art historians believe that Caravaggio was deliberately uncertain about Matthew’s identity to suggest that God could call any of them.

Caravaggio, who worked for a long time in Rome, was undoubtedly familiar with the Sistine Chapel that completed by Michelangelo in the early 16th century and contains the most important works of Renaissance Art.

The Creation of Adam, 1511 by Michelangelo | 10 Things You Need To Know About Caravaggio’s The Calling of St. Matthew

Art historians suggest that the position of the fingers of Jesus in The Calling of St. Matthew mimics the fingers in The Creation Of Adam as part of the tradition of ‘seeing Christ as a second Adam.’

10- Although Caravaggio Was A Sinner, He Made Great Contributions To Christian Art.

When Caravaggio wasn’t creating breathtaking Christian art like The Calling of St. Matthew, he was up to no good.

The criminal record of Caravaggio, a quarrelsome drunk, included fights and one incident where he chucked an earthenware dish at a waiter for not knowing how his artichokes should be cooked. Church officials forgave Caravaggio for these mistakes and continued to do his work.

After murdering a man, the artist was sentenced to death and fled Rome, eventually joining the Knights of Malta to try and get a papal pardon. However, this ended with a fight with another knight.

Eventually, a cardinal decided to intervene and forgive Caravaggio. But a fever got to him before the pardon did: Caravaggio died in 1610, at age 38, but his legacy has lived on for centuries.