8 Famous Impressionist Painters and Their Masterpieces

16 Secrets of Cafe Terrace at Night by Vincent van Gogh 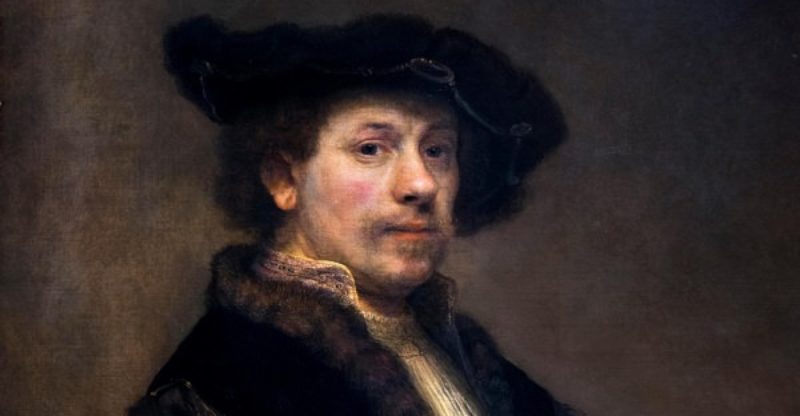 Rembrandt van Rijn actually did not have any animosity with the Italian artists of the Renaissance period, but he still managed to work without being influenced by these painters whose names we know very well. He would ignore Raffaelo, he did not like Leonardo and he managed to escape Michelangelo‘s inescapable influence, he painted that way.

If you ask, did he not necessarily have anything in common with these gifted painters? There is.

He would sign his works just like them, only by name. It may not seem strange to you now, but at that time it was a matter of self-confidence. But Rembrandt van Rijn was someone who proved that his ego was not in vain. That’s why this self-confidence didn’t seem absurd at Rembrandt.

Seventeenth-century art impressed audiences with his dramatic expressions and powerful portraits. He was very good at blending contemporary aesthetics with Dutch tastes. It may be a sad article for those who do not like sad endings, but even if it ends badly, the life we will talk about is truly a life worthy of telling and knowing.

Rembrandt van Rijn is the eighth of the nine children of van Rijn, a miller family from Leiden.

Rembrandt was a boy smart enough to attend Leiden University at the age of fourteen. But Rembrandt had other aspirations besides going to university. In the early days of 1620, he started apprenticing a painter.

After completing his education, he went to one of the metropolises of that time, Amsterdam. Amsterdam was a city where fur traders, spice exporters, and slave brokers ran their business.

The people of the city, where the economic situation was very good, were satisfying their artistic taste by making portraits of themselves and their families. This high demand, of course, caused many painters to gather in this city. In Amsterdam, a stock market was formed for the painter and there was fierce competition.

Among other painters, Rembrandt was able to make a difference by making portraits in which customers not only captured their looks beautiful but also revealed their personalities.

In one of his most well-known works, The Anatomy Lesson of Dr. Nicolaes Tulp, Rembrandt portrays the doctor while explaining his arm tendons while other surgeons listen to him in fascination and focus all their attention on the cadaver. 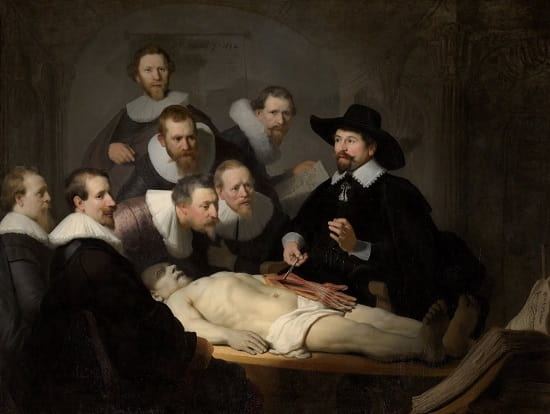 Collective portraits were a very popular genre at the time. People from the same family and professions demanded these works be exhibited at their homes or at the clubs they established.

Other popular works were, of course, works that included a moral lesson, revealing historical or mythological issues taken from the Bible. Rembrandt made his difference here and simplified the compositions. He produced works by eliminating external elements as much as possible.

The 1630s were the years of Rembrandt van Rijn. Orders were not interrupted. Young people devoted to the art of painting lined up to become his student. Rembrandt was not experiencing any economic difficulties in those years. Things got even better when he married Saskia Uylenburgh, who could be considered rich, in 1634. 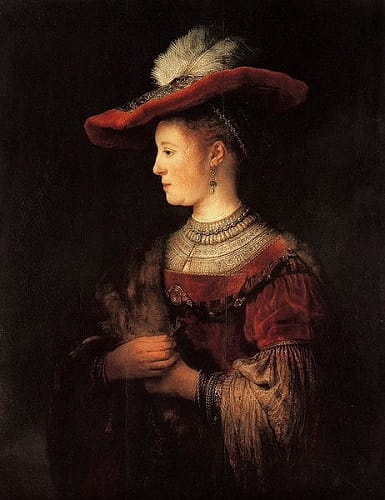 After his marriage, he made various sketches and portraits of his wife. He portrayed his wife as himself, the Roman goddess Flora, and a prostitute sitting on her son’s knee in remorse mentioned in the Bible. Relying on Saskia’s inspiration and its rapidly rising reputation, he entered a mortgage for a large house.

Recommended For You- Common Misconceptions About Renaissance Art

Meanwhile, Rembrandt received an order to paint a collective portrait of an Amsterdam Militia. These troops were protecting Dutch cities at that time. These militia units symbolized Dutch independence and pride.

In 1641, six militia units of Amsterdam ordered the portrait to be displayed in the new headquarters building. Rembrandt was asked to portray Captain Frans Banning Cocq’s troop. The collective portrait made by Rembrandt was as distinct as day and night in others.

This difference revealed Rembrandt’s Night Watch painting. The painting was so vibrant and different, and it contained such a high action that the Captain’s hand gesture was so vivid enough to stir not only the figures depicted in the painting but also the audience. The drummer plays the drums, the flags raise the flag, and the soldiers raise their rifles and spears.

Actually, the name Night Watch was given to this artwork later.

This name might have been ridiculous for that period. Because there was no patrol at night in Amsterdam. At that time the name of this painting was “Militia Company of District II under the Command of Captain Frans Banninck Cocq” or “The Shooting Company of Frans Banning Cocq and Willem van Ruytenburch“.

So why was this name given? Because when the painting came out, the damage caused by the years made us think that the painting was a night scene. That’s why this name was deemed appropriate. 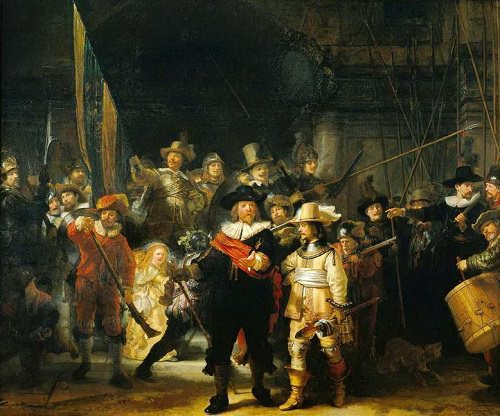 While customers were waiting for a still ordinary painting, they could not hide their admiration when they saw this action-packed artwork in front of them.

Rembrandt van Rijn could not celebrate this great victory, because his wife Saskia had tuberculosis. Saskia died in 1642, leaving Rembrandt behind with a baby named Titus, who was not yet one year old.

Rembrandt van Rijn tried to be faithful to his wife. But the presence of Geetge Diricx, who is in charge of the housework, has been very seductive.

She and Rembrandt became lovers within a few years. So Geetge was promoted to a housewife and took home a maid named Hendrickje Stoffels. With this beautiful maid, her relationship with Rembrandt was revealed. Hendrickje, who was pregnant, appeared before the council for immorality and was kicked out of the house by the wife of the house, Geetge.

Rembrandt van Rijn, who had a terrible decade after his wife’s death, was now a discredited painter as his artistic tastes changed.

When the painter, who was in financial trouble, could not pay the mortgage, he took personal loans from Amsterdam businessmen. He sold some of his goods, but still, this money was not enough to cover his debts.

Bankrupt Rembrandt had to sit in a corner and watch them as finance inspectors took out an inventory of his belongings and sold them to get the creditors ‘ money. Rembrandt, who also had to sell his house in return for debts, had to move with his family to a small house in a very unattractive neighborhood.

The Conspiracy of Claudius Civilis and Rembrandt

Penniless remaining Rembrandt’s the only thing left in his hand, which was his self-confidence.

His belief that he could get everything back with one big gamble was not shaken. This opportunity occurred in 1661 by ordering a painting for the newly built town hall. The subject of the painting was the picture of the feast in which the Batavians, a Germanic tribe whom the Dutch regard as their ancestors, revolted against Roman oppression and declared this rebellion.

This is how “The Conspiracy of Claudius Civilis” painting came about. 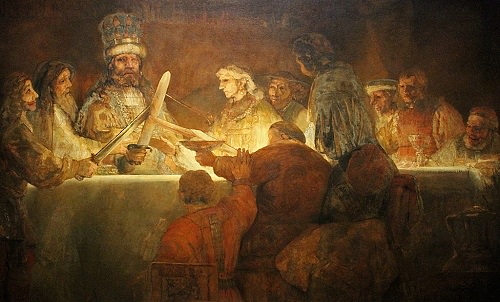 Rembrandt van Rijn once again revealed his own style, depicting his ancestors as barbarians rather than gentle and inspiring people in a different than expected painting as in Night Watch.

Rembrandt’s gamble did not work this time. The authorities did not think their ancestors looked the same as in Rembrandt’s description. It was decided to put down the picture from where it was hung.

The 1660s were terrible years for Europe. Plague and death loomed.

The disease took the life of his wife Hendrickje in 1662. The art dealer and his son Titus, who promoted and traded his father’s paintings, died in 1668, eight months after his marriage.

Despite the painful years, Rembrandt produced his most beautiful works in these years. He died on October 4, 1669.

After Rembrandt died, he and his work were long called ‘banal’ and crushed by critics. And over time it was ignored. It was Impressionists and post-impressionists who rediscovered it in the 19th century. They were amazed by his painting technique.

The story goes that upon viewing Rembrandt’s Jewish Bride for the first time in 1885, Vincent Van Gogh said:

“I should be happy to give 10 years of my life if I could go on sitting here in front of this picture for a fortnight, with only a crust of dry bread for food.” 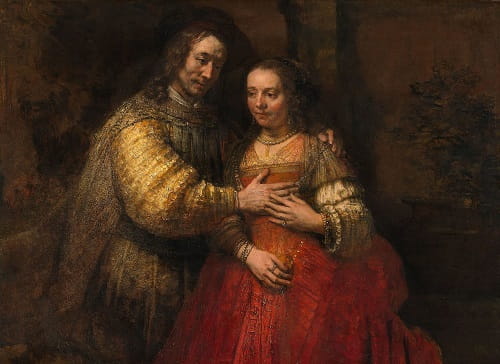 PS: Rembrandt has been surprisingly fond of self-portraits throughout his life. He made more than eighty portraits and engravings of himself. 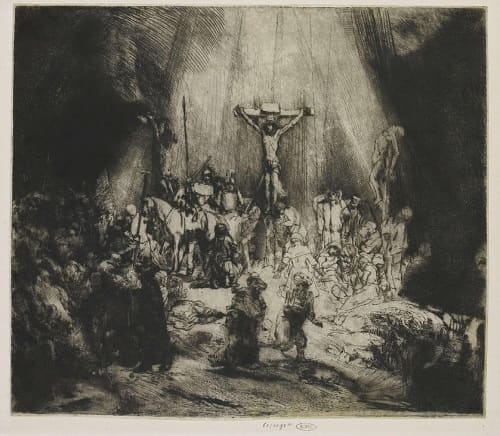 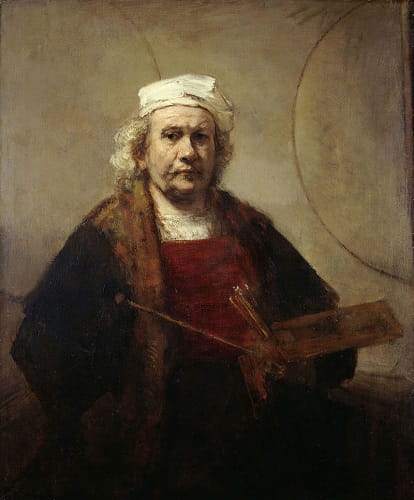 Self-Portrait with Two Circles, 1665–69 by Rembrandt 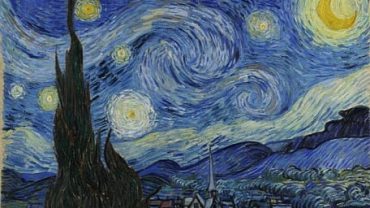