The Life of Vincent van Gogh and Paintings

6 Paintings of Modern Times You Need to Know

The life of Franz Kafka

Would you like to know the life and art of the French painter Henri Matisse, the master of the color of red, the pioneer of the Fauvism movement, the friend of Pablo Picasso, the owner of the sentence “creativity takes courage“?

Inspired by Henri Matisse’s quotes “Art should be something like a good armchair in which to rest from physical fatigue“, we recommend that you sit on your seat and enjoy this interesting life story.

The name his enemies gave him was Fauve or wild beast. The reason he was given this nickname was that he used brighter colors and unusual shapes than ever before.

It was quite normal for those who heard this nickname to imagine the man they would meet as a maniac with a goatee. But Henri Matisse was a smiling gentleman with a tailor-made dress, far from their dreams.

Those who witnessed this state of Henri Matisse were telling their surroundings in amazement that he was more of a gentleman than a wild beast.

In fact, his painting was not wild as his enemies described it. More than anything else, Matisse sought tranquility, a refuge from the troubles of the world. Few art lovers of his age could perceive this tranquility. The general view was that art forced the audience.

Regardless, cheerful pictures of a man with a wild beast nickname attached are now enjoyed by all people around the world.

Henri Matisse’s family were hard-working people running a country shop and seed supply business in Bohain, a small town in France. They were planning for their eldest son, Henri, to take over the business when he was an adult.

It turned out that the eldest child of the family, who had high hopes due to Henri’s dreamy temperament, was not suitable for this small business. His family sent Henri to Paris for a year of legal education, and on his return, he took a job as a law intern.

Recommended For You- 8 Amazing Facts About Henri Matisse

Art in the Hospital Bed

It was soon realized that the field of law was not suitable for Henri Matisse’s dreamy temperament.

Life was boring for Henri Matisse. These troubles caused his relations with his family to deteriorate. The tension he experienced with his family affected him so deeply that he was hospitalized due to his psychological problems.

His roommate at the hospital was copying oil paintings. Inspired by his roommate, he asked his mother to bring him a paint set. His first try to copy a lithography excited him.

“From the moment I held the box of colors in my hands, I knew this was my life. I threw myself into it like a beast that plunges towards the thing it loves.”

In his early years, the artist will produce quite traditional paintings, and later on, although he begins to be influenced by the expressionism movement, which includes painters such as Monet, Paul Cezanne, and Van Gogh, he will adopt the fauvism movement, an art movement developed by him in France between 1898-1908.

With this enthusiasm, he enrolled at a local art academy, but his main wish was to study in Paris. After long quarrels with his father, in October 1891, Henri Matisse made his way to Paris.

The first few years Henri Matisse spent in Paris were quite difficult. After these few years, Henri Matisse was able to overcome difficulties, and his works received official accolades. He even found a beautiful model named Camille Jablaud, and this model also became his lover.

In 1894 they had a daughter named Marguerite.

While there was a serious academic career opportunity, Matisse turned it down as well.

After this breakup, she met Amelie Parayre, whose character is more suited to his character. Amile loved Matisse, but Henri Matisse had made clear to her that the painting came before her. Amile seemed to have accepted this situation, after her marriage, she was doing her best not to engage in matters outside of the picture.

Two boys, Jean, born in 1899, and Pierre, born in 1900, were sent to their grandparents so that they would not interfere with their father’s business and keep him busy.

Meanwhile, Henri Matisse was trying to find his own style in his painting. He made this breakthrough in 1905 with the Portrait of Madame Matisse, showing Amile in a red and pink dress, with a green stripe extending from her forehead to her chin, in front of the green, red and purple blocks.

Green was neither the color of the lady’s nose nor did it represent jealousy. Green was just green. Matisse had just wondered what effect that color would have with the other colors on the canvas.

After all, he was looking for a new harmony using color, but art lovers and critics could not see anything harmonious in this work.

The work exhibited in the autumn hall contrasted the sculpture found in the same exhibition, and one critic said it was “Donatello among the wild animals.” This interpretation was quickly adopted in art circles and made Henri Matisse known as a wild beast that overpowered and violated artistic tradition.

This recognition did not please Henri Matisse. He feared that the pursuit of novelty had doomed him. But he managed to excite the art lovers who followed avant-garde painting eagerly.

For a painting, Matisse drew on the memory of the Catalan fishermen she saw dancing along the Mediterranean coast.

He painted five dancers holding hands in front of a wavy surface against a sparkling sky.

The Dance, the simplicity of paint determines the real source of the painting’s energy. Art critics found the painting animalistic and primitive. However, this work later became one of Matisse’s best-known works.

When the first world war broke out, Matisse’s two sons were also conscripted. Matisse, who lived in Cimiez, a suburb of Nice during the war, made a deal with a Russian immigrant, Lydia Delectorskaya when she needed a new assistant after his wife Amelie fell ill.

Of course, it was possible that this divorce was the cause of forbidden love, but the letters were written showed that it was most likely not true.

When World War II broke out and the Germans invaded France, Henri Matisse frankly didn’t care much. He argued that post-war calmness was necessary and continued to make calming and decorative works.

Henri Matisse’s work titled Le Bateau was exhibited at the New York Museum of Modern Art (MoMA), but no one noticed that this work was displayed in reverse for 47 days.

It is thought that approximately 116,000 visitors passed by or were examined without realizing that this work was upside down.

By 1941, Henri Matisse suffered from duodenal cancer. He had a difficult operation. After this surgery, he started having difficulty painting. This situation led him to collage. As a result of these colleges studies, a book called Jazz was compiled in 1947.

An Example from the Jazz Book | Henri Matisse Art 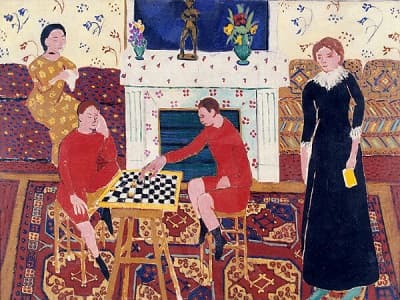 The Painter’s Family, 1911 by Henri Matisse

The Reader (His daughter Marguerite Matisse), 1906 by Henri Matisse

The Goldfish, 1912 by Henri Matisse