Who is Pablo Picasso? It is exaggerated, but these exaggerations can be ignored thanks to his art. You cannot look the other way against his art. Pablo Picasso is the owner of that extraordinary art.

When you try to talk about art, you have to decide which Picasso you are talking about. Because he has many periods to define him and he is really good in all of them.

The groundbreaking inventor of Cubism?

Neoclassical painter of the 1920s?

Or was he the political painter of the 1940s?

To try to understand Pablo Picasso, you have to look at him the way you look at one of his cubist portraits. Just as you often see both sides of a profile face in Cubism, in Picasso you have to see all sides of the painter at the same time.

The Life of Pablo Picasso and Paintings

What is Picasso’s Full Name?

Picasso had a lofty and long name. He had 16 names. How Spanish he is, isn’t he?

His father, Jose Ruiz, was working as a curator of a regional museum. He was also a painter, but not a very talented painter. But this non-brilliant painter taught his son Pablo to paint. By the age of 12, Pablo Picasso outstripped his talent so much that he handed all his brushes over to him and Jose Ruiz never painted again.

The Picasso Name Could Actually Never Have Been

Pablo Picasso later began signing his paintings with his mother’s name as a salute to his mother instead of his father’s name. That famous Picasso name comes from his mother.

At the age of 13, Picasso enrolled in an art school that usually had 20-year-old students. After studying at the academies in Madrid for a while, he moved to Paris. He barely survived because he could not speak French and had no money. He ate little and stayed with friends in dilapidated apartments.

He finally managed to get into his own apartment with a dog, a cat, a mouse collection, and a little monkey, along with his new girlfriend, Fernande Oliver. Picasso loved animals, but he could hardly be said to take care of them.

PS- The scruffy Picasso worked and lived among the high hills of paper, receipts, canvas, empty bottles, and bread shells. It also comes with a collection of dogs, cats, mice, and even a little monkey.

Over the years, his lines became more daring. He started using simple shapes such as ovals, triangles, and circles to describe the figures. It was precisely these days that Picasso was introduced to African art and his bold abstractions of powerful forms of the ceremonial mask enchanted him. Geometric abstraction and African masks have come together with a revolutionary understanding of painting since late 1907.

Portrait of the Poet Sabartes, 1901 by Pablo Picasso

The Old Guitarist, 1903 by Pablo Picasso

“The Young Ladies of Avignon” (Les Demoiselles d’Avignon), named after the Avignon brothel near Barcelona.

The painting shows five prostitutes who present themselves to customers to examine them. Women from Avignon are made of hard-edged shapes. A chest is a pointed triangle. The leg is a protruding block. Some of the women’s faces are similar to African masks.

Even Picasso’s most ardent supporters were stunned by the painting. Ambrose Vollard, one of his most admired critics, described it as “the work of a madman”.

Even though a century has passed since that painting was made, the painting has a compelling character even for the eyes modernized by our time.

Picasso questions the whole tradition of painting nude women, deliberately bringing to mind beauty icons and then destroying them.

Les Demoiselles d’Avignon marked the way to Picasso’s next artistic era. In the autumn of 1908, he and his friend Georges Barque delivered a few pictures to the Autumn Hall that smashed subjects that completely ignored perspective and put them on multiple flat surfaces.

In cubism, subjects are fragmented and reassembled into geometric forms. Because no viewpoint is prioritized, you can see an object in front of and next to it at the same time.

Cubism soon became the first “ism” of modern art. Many painters fervently discussed the aims and approaches of this style. In a short time, such rules and intellectual meanings were imposed on them that Picasso approved of very few of them.

Meanwhile, Fernande Oliver had been dragged from their filthy home, and Picasso started a relationship with Marcelle Humbert, whom he called Eva. The outbreak of World War I shattered him around the painter’s circle. When Eva died of tuberculosis in 1916, Picasso’s life and works became bleaker.

The following year, Picasso fell in love with Russian dancer Olga Koklava while designing the decor and costumes for the Ballets Russes. They got married in 1918. The end of the war and Olga’s pregnancy gave Picasso a desire for traditionalism. Picasso was now the father of a boy.

He entered a neoclassical period and painted scenes with mothers and children and images from Greek mythology.

But that didn’t stop him from pursuing a talented photographer named Dora Maar in 1936.

Pablo Picasso celebrated the founding of the Second Spanish Republic in 1931. When the Spanish civil war broke out in 1936, he fell into despair. Especially when nationalist forces besieged his hometown of Malaga, he almost fell into crisis.

In April 1937, the defenseless village of Guernica was attacked by bombers testing waves of fire and incendiary bombs. This attack created a deep shock in Picasso, as in all of Europe.

Picasso suddenly found himself in the middle of a war between good and evil. He had previously asked him to paint a large mural for the Spanish pavilion of the Paris international exhibition. He decided to portray the horrors of the bombardment.

The result of this depiction was the magnificent Guernica painting.

Approximately 3 and a half meters by 7.75 meters, the black-and-white and gray painting, as it was deliberately designed, brings to mind newspaper photographs and almost has the quality of a documentary.

A soldier, surrounded by weeping women, lies on the ground, broken into pieces like a statue. An injured horse screams and a threatening bull approaches from the left. Above all, an electric light bulb shines like the all-seeing eye. Hope has found its place in this picture, albeit small. A woman is a small flower that grew up next to a fallen soldier with a candle in her hand, figures of hope in this picture.

Picasso, with Guernica, was the heir of Francisco Goya, using all the techniques of modernism to depict human suffering with all its reality.

No, Picasso replied, ‘you did’

Picasso, who chose to stay in Paris during the war, almost started to work with German soldiers in his studio after Paris was occupied by the Germans. Picasso gave them postcard reproductions of Guernica as gifts. Legend has it that the German ambassador took the postcard and sneered:

Picasso survived this German occupation and the end of World War II caused him to increase his reputation in Paris.

Pablo Picasso’s style of recent years varies. He made both political paintings, cubist paintings, and colorful landscapes almost like Matisse.

One of his most memorable works is the pregnant goat sculpture named “The Goat – La Chevre”. Made of discarded material, including cardboard, plaster, broken jugs, and a worn basket in the snow, the work has its own air and, to tell the truth, a funny, as well as arrogant.

Pablo Picasso remained remarkably healthy and energetic until the late 1960s. He died of heart failure in 1973. He had a shocking determination to work. He left 1900 paintings, 3200 ceramics, 7000 drawings, 1200 sculptures, 30000 graphic works behind.

I guess it would not be wrong to say that whatever the effect Leonardo da Vinci had on art in the Renaissance is the effect he had on art in modern times. All the artists who came after him were affected positively or negatively by him.

Girl Before A Mirror, 1932 by Pablo Picasso 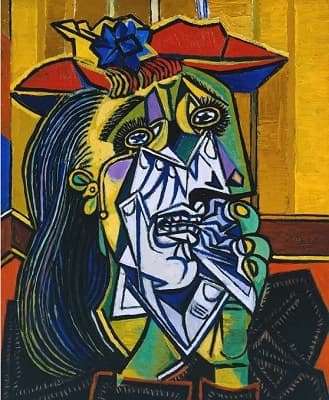 The Weeping Woman, 1937 by Pablo Picasso

Family of Saltimbanques, 1905 by Pablo Picasso

The website, where you can view “5 Famous Paintings You Need To See“ and more than 50,000 world-famous paintings of art in high resolution, has been made available free of charge by the Art Institute of Chicago (AIC). You can access the website here and see other works of art you are interested in.