Since the creation of the so-called artworks, one of the biggest expectations about them is that they have a message. Johannes Vermeer (Jan Vermeer) creates some confusion about this.

What does a maid spilling milk, a woman reading a letter, a woman trying to make music mean to us? What meaning do we find in these artworks? Man desires these works to have a meaning, to have much deeper meanings than they seem.

People have the same desire for the lives of artists. They want to hear that they have been affected by the events that happened to them and material and spiritual difficulties throughout their lives. They want to believe that all artists should go to the border of insane-genius. Of course, many artists in the history of art meet this expectation, but there are also names who do not respond to these expectations.

One of these names is Johannes Vermeer (Jan Vermeer). It’s almost an ordinary life for that age.

Why a maid who spilled milk?
Why is a girl with half-open lips with a single pearl in her ear?

These questions have no answers.

Johannes Vermeer (Jan Vermeer) lived at a time when the Netherlands was very advanced in arts, science, and also the economy was very good.

The developed middle class, with a lot of money, sought painters to fill the empty walls of their newly acquired large houses. It is natural that this situation benefited the painters of that period the most. The Dutch state, which was originally Protestant, had created an environment of religious tolerance compared to the rest of Europe.

Vermeer’s life was shaped in this relatively original environment. Apart from the baptism record, there is a recording from him for the first time in April 1653. This record is the record of his contract with Catharina Bolnes. This marriage came true, for which Catharina Bolnesi’s family was not very willing.

After proving his art, he got his name written among the masters. Although Vermeer has a Protestant identity, he actually lived more like a Catholic.

In 1655, the Saint Praxedis painting depicts a Roman saint who is preparing to bury the corpses of Christians killed for his religion. This artwork is quite different from Vermeer’s other works. This work can be summarized as a search for style.

One of the first works of Johannes Vermeer in which he found the style known by the world is “Girl Reading a Letter at an Open Window“.

It is possible to find almost all the traces that define Vermeer from this work.

A girl looks at the piece of paper she is holding in front of an open window. Is this a love letter? Or is it a notice of intent to lien? Uncertain.

But when we look at the work, the most interesting point is that although it is able to close the curtain, it keeps the curtain opens for the audience to see. From the thoughtful expression on his face, we can say that it is troubling.

Thinking that he had discovered his favorite subject with this painting, Johannes Vermeer deviated very little from this subject throughout his career. He made about twenty-five paintings whose main subject was the woman standing by the window.

In these paintings, women pour milk, read their letters, make music, examine their ornaments. There is a second woman in her works sometimes thought to be a servant.

What is almost non-existent in his works are male figures. Most of the works take place in the same room, just like in front of a window.

The Girl with a Pearl Earring by Johannes Vermeer (Jan Vermeer)

The reason why women are so dominant in his works may be due to a large number of women in Jan Vermeer’s life. In 1660 he and his wife were staying at his wife’s mother’s house and their first five children were girls.

Although there are too many women in Vermeer’s artworks, they do not reflect them as an object. They are important individuals who play the leading role in the painting. Women’s gaze has never been seductive, cheeky.

It is possible to prove that the women seen in Johannes Vermeer’s works were not used as objects, through the work of the Girl with a Pearl Earring.

“The Girl with a Pearl Earring” may come to you admiringly, but never sexy, and never look at you with lustful looks.

Johannes Vermeer (Jan Vermeer) was highly respected throughout his life. His contemporaries called him ‘famous‘. He was twice appointed head of The Delft St Luke Guild.

Vermeer was not a very prolific painter. He could complete no more than three or four paintings a year. The number of works he completed in his life does not reach even fifty. It was not enough to sell his paintings alone to support his extended family. Vermeer made a living by selling his wife’s estates for a long time. He was also an art dealer.

The art market collapsed. Vermeer was not able to sell his own works, nor those of others. Meanwhile, one of his children and also his most important customer died. Vermeer, who could not withstand the great pressure he was experiencing, fell ill and died within a day and a half even though he had no illness.

He left ten young children and a desperate wife. His wife had to declare bankruptcy.

It is possible to find traces of why the women in his works look pregnant in Johannes Vermeer’s life. Vermeer has had fifteen children in almost two decades. It is estimated that he often used his wife as a model.

Adolf Hitler, a failed painter, was one of Johannes Vermeer’s big fans.

He gave strict orders not to overlook his artworks in the lands he occupied. The works of art uncovered towards the end of World War II; A collection, including works by Jan van Eyck, Leonardo da Vinci, Albrecht Dürer and Rembrandt, has been stored in a salt mine in Austria.

Close to losing the war, Hitler ordered the salt mine to be destroyed. Local authorities, who were sensitive to the artworks, delayed the implementation of this order until they saved the artworks.

Among the artifacts in the mine were artifacts belonging to Johannes Vermeer. 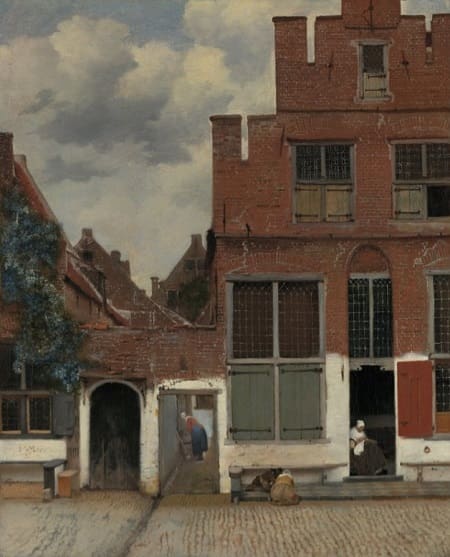 The Little Street, 1658 by Johannes Vermeer

The Music Lesson (Lady at the Virginal with a Gentleman), 1662-1665 by Johannes Vermeer (Jan Vermeer)